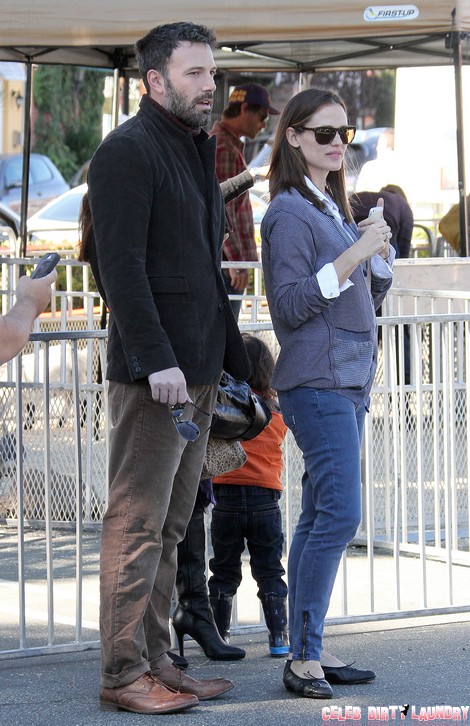 In our next episode of Jennifer Garner and Ben Affleck’s non-sham marriage [cough, cough], we bring to you the Name edition.

Garner and Affleck have been the subject of intense speculation for months now, and their response to the speculation has been photo op after photo op of the family looking loved up and happy. It’s their way of saying that the rumors are full of crap, and they’re just fine. After all, all marriage is ‘work’, is it not? And they are clearly doing their best at making it ‘work’.

Now, there’s always a fine line in celebrity marriages between using their name/family/photo ops for press/publicity/awards campaigning, but there’s a level of hypocrisy that also exists with this. You can’t complain about the paparazzi and the attention when you feel like it, and then call them the next day and ask them to come photograph you looking love-dovey with your wife.

The difference is – couples like Angelina Jolie and Brad Pitt have a very good understanding of this. Do you hear Brad or Angie complain about the lack of privacy or the amount of attention they get? Any time they are photographed, it’s like a mob zoo, but they understand the price of stardom and they know that they use that press to their benefit when they want to. No one plays the game like Angie and Brad.

On the other hand, you have the Affleck-Garners. Or should we say just Afflecks? Garner’s identity has been so dwarfed by her husband that it would seem like her name doesn’t mean much without Ben’s anymore. They complain about the paparazzi, but have no trouble using them as they see fit. In fact, although Ben does this more, every single time one of Jennifer’s movies have been released, there’s a swarm of happy family pictures. Really, why does she even bother using the name Jennifer Garner. It’s Jennifer Affleck that sells, and it’s probably what she’ll end up changing her name to eventually. Not that there’s anything wrong with that – but she should really think about her career choices and what she’s willing to give up to stay on the A-list. Because if you measure it by the quality of her movies, not name, you’ll end up with barely B-list.  Measuring it with the amount of attention these photo ops get her, on the other hand, equals A list. You be the judge.