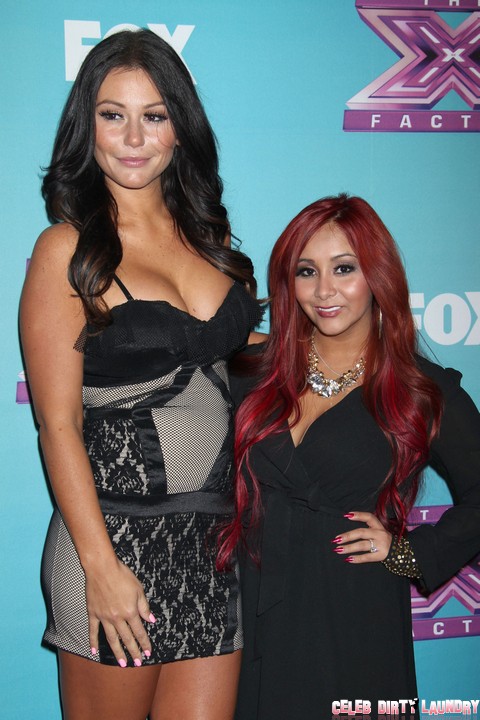 The cast of the Jersey Shore didn’t get famous by keeping it classy and appropriate, so you shouldn’t be surprised to learn that Jennifer Farley (or JWoww, as most call her) terrified the crowd at the MTV New Year’s Show from Times Square by bending over in a short, sparkly dress, giving a too-personal shot of her butt! The 26-year-old chose a dress that barely touched the top of her thighs, so what did she expect? Of course, girl is no stranger to having naked pictures floating around!

To be fair, the evening didn’t go as planned. JWoww tweeted, “Opening @MTV New Year’s Eve with the teleprompter going out and me and @snooki improving!!! Holy sh*t wild.” I guess part of her improv was to flash the audience to distract them from the technical issue?  The internet hasn’t exploded with JWoww and Snooki presenter hate, so I suppose it all ended well.

I guess this goes to show that even with the Jersey Shore officially over (and being followed by Buckwild, which chronicles daredevil twentysomethings in West Virginia), the cast can still have regrets broadcast nationally! Fortunately, Snooki’s wardrobe malfuction wasn’t a problem of indecent exposure, just bad taste! She showed up in a unique, corset style mini dress with waist cape and crayola red curled locks. It must be the sort of thing you wear when there is absolutely nothing left to say. I mean, Snooki has done and said it all, right? So who cares anymore?

I think the best part about JWoww’s dress is that the embroidered sparkly bits look kind of pointy—a photo of her torso makes it look like she has 34 DD weapons on her chest! Get too close and she’ll poke your eye out and scratch up your face with those decorative “ornaments”. The up-the-skirt photo is pretty mind-bogling. It’s hard to tell if she’s going commando, wearing weirdly colored Spanx, or just seriously disfigured.

Check out the Upskirt Shot Here – if you must!