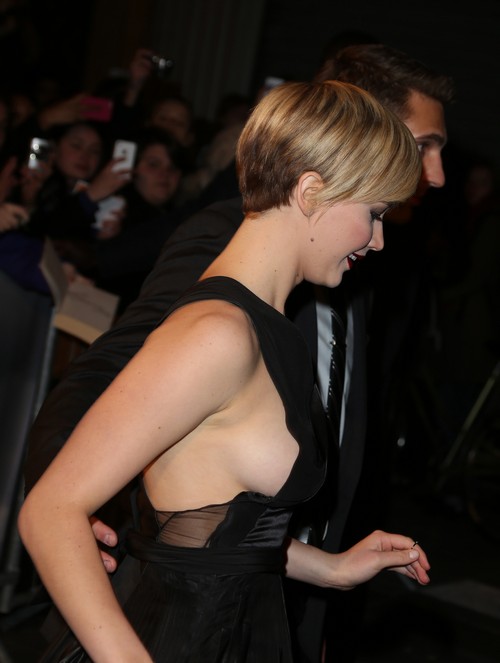 Jennifer Lawrence is one of Barbara Walters‘ Most Fascinating People of 2013 and in the accompanying interview, Jennifer spent some time speaking out against the constant fat shaming that goes on in the media.

She explains, “I just think it should be illegal to call somebody fat on TV. I get it, and, and I do it too, we all do it… [But] the media needs to take responsibility for the effect that it has on our younger generation, on these girls who are watching these television shows, and picking up how to talk and how to be cool. I mean, if we’re regulating cigarettes and sex and cuss words, because of the effect they have on our younger generation, why aren’t we regulating things like calling people fat?”

On same basic level, I agree with what she’s saying about making the word ‘fat’ have a bigger negative connotation. Right now, it’s such a throw-away word that everyone uses, like ‘oh, she’s so fat’, and ‘oh, he’s gotten so much fatter’. And fat is definitely relative, especially since we have a tendency to be much harder on celebrities and public figures than ourselves – and of course, it doesn’t help that the camera usually adds about fifteen pounds.

But even then, I wouldn’t necessarily agree that the word ‘fat’ should be regulated. I mean, that’s just silly. I think people need to be careful on what they’re calling fat and realize that body shaming will never make anyone feel better, but in reality, that word is just a daily part of our vocabulary. You can make arguments for why it should or shouldn’t be, but that’s not going to change. But the media does have a responsibility to set better examples for young girls, and I agree with Jennifer that the way ‘fat’ is portrayed on television needs to change. It’s a particularly passionate topic for Jennifer, who speaks out on this issue a lot – probably because she herself has to deal with weight stories all the time. I mean, that’s exactly what I’m saying about the media’s responsibility – if an actress as skinny as Jennifer has to face fat stories, then how would other girls feel? The girls that are not size zero and have actual curves?

What do you guys think? Do you agree or disagree with Jennifer? Let us know your thoughts in the comments.