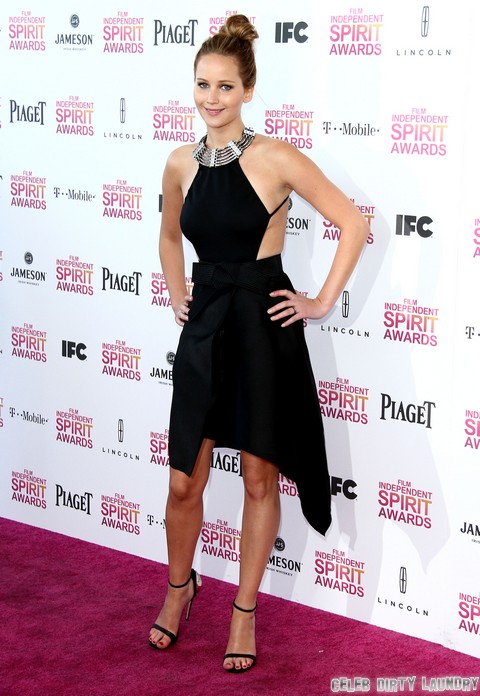 It looks like someone needs to give Jennifer Lawrence a sandwich, maybe two!  The Silver Linings Playbook star stepped out for the 2013 Film Independent Spirit Awards on Saturday and decided to up the ante in a revealing black Lanvin dress.  The actress made a startling entrance in the revealing dress which besides side boob, also showed that Jennifer seems to have been beaten into submission by those around her that insisted she be a bit thinner.

Up until very recently Jennifer was flying in the face of the standard super skinny Hollywood ideals and claimed to embrace her body and looking like more of a normal girl. The 22- year old starlet has never been heavy, she simply looked much healthier than most of the other actresses her age. Perhaps that was precisely the problem. In order to remain competitive for roles Jen has whittled herself down to a pinhead and she looked better before.

I’m going to hope that in this case Jen just wanted to look amazing at the Academy Awards where she has been nominated for Best Actress and then took that goal a bit too far. Otherwise it’s sad to see someone who spoke out and encouraged young girls to take care of their bodies opt to do the exact opposite. She had been setting a good example and was proof that beauty isn’t reserved for those that fit into a size two. Let’s hope after awards season wraps up Jennifer realizes that she’s not healthy at this size and that the weight lost has actually really cost her that healthy glow she was known for.

Did she go to far? Do you like to be able to count Jennifer’s ribs? Is that healthy and fit to you? Tell us your thoughts in the comments below!