Jennifer Lawrence Golden Globes Date: Will She and Bradley Cooper Go as a Couple? 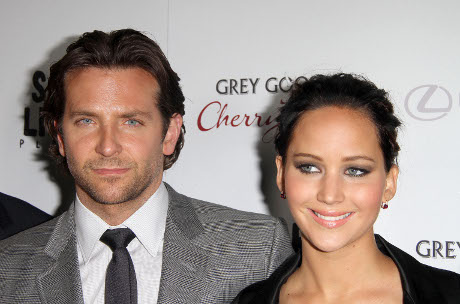 Jennifer Lawrence recently split up with boyfriend of 2 years Nicholas Hoult, so who will be her guest for one of the year’s biggest awards shows? Well, it clearly won’t be Nicholas. He’s long gone. And even though I think it would be the perfect time for Bradley Cooper and Jennifer Lawrence to come out as a couple (if they are in fact dating), he also didn’t make the cut — but don’t worry, he’ll still be in attendance because, like J-Law, he’s been nominated. We just thought . . . . What better moment than a red carpet for two celebs to come out and say they’re dating?

Jennifer Lawrence recently told E! that her dates for the night’s events will be two very special people in her life: her parents! Lucky for her she’ll be able to bring them both. At first she thought the invitation to the Globes mandated “Plus One Only,” but it turns out she’ll be able to bring two guests! How cool would it be for her to win one of the most coveted awards in acting with her parents sitting beside her?

“I can bring both my parents, which is amazing,” she told Mark Malkin at the BAFTA Tea Party yesterday. “It was originally just a plus-one.” We have a feeling that the Golden Globes extended a special invitation for Jennifer, who’s been gaining an incredible amount of praise this awards season for her sincere performance in Silver Linings Playbook. But who knows . . . . Maybe everyone can bring two people. In that case, I’m a little sourgrapez that nobody sent me their second ticket.

She’s also terrified of winning, which is a very likely (and perhaps inevitable) possibility. “I think of the nightmare of getting up there and like my pants falling down and instead of me saying, ‘Thank you,’ I end up being like, ‘Screw all you guys!'”

Jennifer, as she proved at the Critics’ Choice Awards the other night, is actually very eloquent. So I don’t think she has to worry about accidentally roasting the crowd with unintentional obscenities.