Jennifer Lawrence And Nicholas Hoult Back Together, Will Bradley Cooper Freak Out? 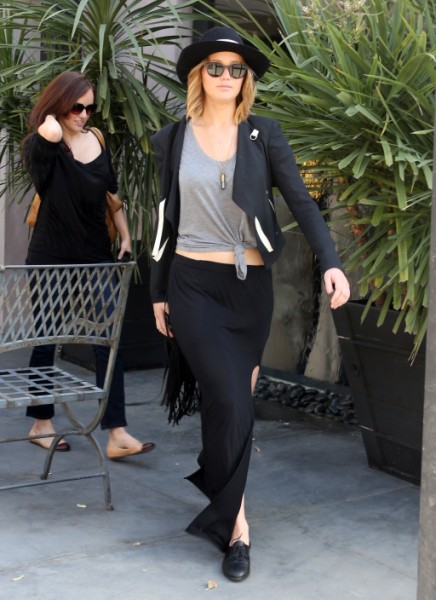 What a lovely way to wake up to a Tuesday morning. Mystique is finally back with Beast. Or, to all you non-X-Men freaks out there, Jennifer Lawrence and Nicholas Hoult have rekindled their adorable romance. THANK GOD! I’ve been waiting long enough for this. It was whispered that Harvey Weinstein made Jennifer give him up during awards season last year so she’d have a better shot at the oscar. I’m pretty sure Harvey was behind all the are they or aren’t they rumors regarding Jennifer and Bradley Cooper too. Well, his Machiavellian tactics worked, and now Jennifer is free to go back to living her life, which means being generally awesome, smoking weed on balconies and getting back with Marcus from About a Boy. Heaven.

Now, I could be jumping then gun. Jennifer and Nicholas were just pictured yesterday eating together in Hollywood. Could be no big deal. Could be they were just going over motivations for the upcoming X-Men sequel they’re shooting soon. But that’s no fun! Why would you spend extra time with an ex anyway if you really didn’t have to? There’s some reconciling going on for sure. Trust.

So for all you who really, really wanted Bradley Cooper to happen for her, what do you think about this? Ugh, I’m so excited that idea is getting pushed to the curb again. First of all Bradley’s got his model now and it’s supposedly pretty serious because Suki Waterhouse was spotted at the White House Correspondents’ Dinner with him. And there never was a Jennifer/Bradley thing to begin with. I think, in the back of his mind, he probably entertained it but it was never going to happen. He was just being a good friend and keeping her company while Nicholas had to take a back seat. I’m OK with this. Bradley Cooper is probably a really good friend to have. I’m not so sold on if he’s the best boyfriend/husband but that’s another post for another day.

Is Jennifer Lawrence dating her co-star again? Are you as over the moon as I am? They are gorgeous together – the Kentucky girl and her English gentleman!