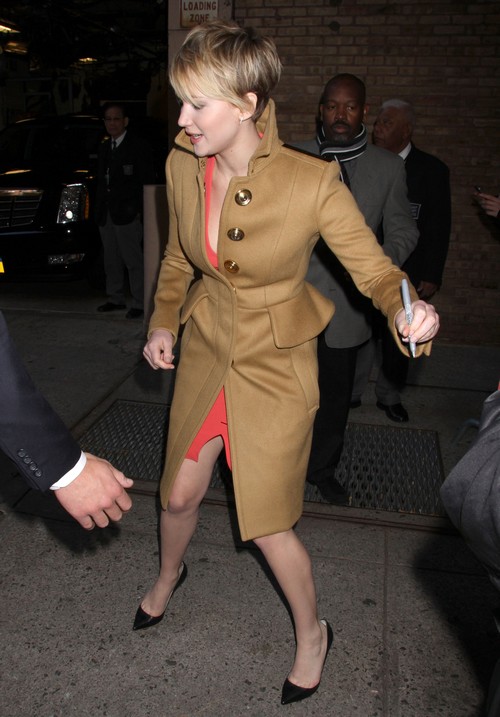 I know the majority of the Internet absolutely and unabashedly loves Jennifer Lawrence, and while I also fall firmly in that category, I don’t really understand some of the things she says. She has no filter, all her co-stars and she herself has said this many times. But I guarantee you she’s received extensive media training, and I also guarantee that discussing butt plugs and sex toys on talk shows is probably a firm no-no. Now, that either didn’t take OR she’s playing the game better than we even know.

She’s funny, she’s just like us, etc etc. That seems to be the common refrain among J-Law fans, which again encompasses most of the public. And she’s a terrific actress, which is really all that should matter. But it doesn’t, and that’s where Jennifer’s latest interview with Conan comes into play. Although significantly calmer than her interview with David Letterman, this was still extremely funny and weird – and sometimes over-the-top.

The question started off innocently enough, with Conan asking Jennifer what her dream profession would be. The answer started out as hotel maid, and then she went into a treatise about how a friend left her a bunch of butt plugs as a joke and how an actual hotel maid saw all her butt plugs and decided to lay them out on the bed.

There’s no doubt that she loved telling this story, and the audience also lapped it up. But I can’t help but get the feeling that she’s purposefully overplaying all these stories in an effort to appear even more appealing. She’s either very good at playing the game, or she just doesn’t care what people think. Maybe a bit of both. But whatever it is, we’re going to get plenty more of these stories as Jennifer’s awards season promo kicks into high gear.