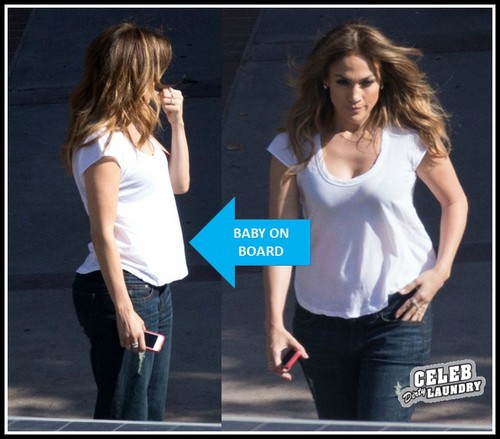 Jennifer Lopez is ready, willing and able to have another baby, “she has been open about her desire to have more children.”  The problem is her current boytoy Casper Smart is not interested. The two are having serious problems with their relationship and are reportedly fighting like cat and dog and their two-year relationship is being held together by a thread.

Rumors have been circulating that although Casper is not keen on becoming a Dad, Jennifer has ignored him and gone ahead and gotten pregnant. “What’s got everyone buzzing is her mysterious baby bump.”  Jennifer was spotted taking her kids Emme and Max to work and she looked more than a little pregnant.

Casper is not going to be happy!  Casper already feels that being Mrs. J-Lo has cast a shadow over his career and if Jennifer is pregnant that would just make a bad situation worse.  People are always criticizing him for being a gold-digger and he feels having a baby with Jennifer would just make him fall more into the background.  OK Magazine reports, “No matter what he does work-wise, people will always question whether he did it on his own or with her help.”

Casper also knows if he breaks up with Jennifer his career might be finished.  After all her two previous husbands’ careers have faded into obscurity since they left Jennifer.  Could Casper survive a breakup with Jennifer?  One thing for sure Casper better watch out because if Jennifer is pregnant, she might not need Casper for anything anymore and his days just might be numbered.

What do you think CDLers is Jennifer Lopez pregnant?  Or has she just ate one too many Twinkie?  Thoughts?