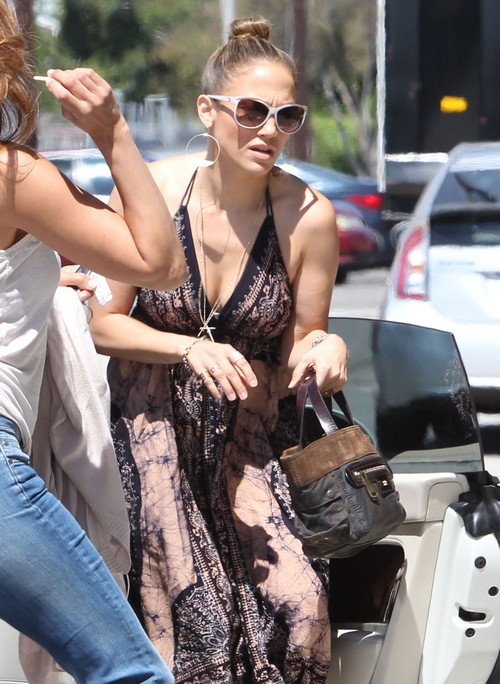 An exclusive from OK! Magazine states that Jennifer Lopez is pregnant, but is splitting up with Casper Smart. Apparently, the couple has been drifting apart for some time, but it’s only now – as Jennifer’s pregnancy comes about – that they’ve started talking through their problems.

A source tells OK!, “If Jen’s pregnant, there’s no doubt that it will have caused more than a few arguments, because Casper is not keen on becoming a father right now. There’s no doubt Jen is surprised that they’ve lasted this long, and it’s because they’ve found a really solid friend in each other. It’s when talk of babies, cougars and money comes up that things go wrong. If she is pregnant, and they’re going through a rough patch, which they are, Jen will be tempted to cast Casper off.”

You know, even if the source is hokey, OK! is usually more solid than Star and the Enquirer. It’s definitely true that Jennifer’s and Casper’s problems seem to revolve around other women, children, careers, and money. Casper is still a boy child and is riding on Jennifer’s coattails, but the problem is that she doesn’t seem to mind. That being said, I think she realizes that she and Casper don’t have a future, which is probably the only reason they haven’t gotten married yet. If you look at Jennifer’s pattern of relationships, they almost always end in marriage, especially if she’s been going out with the guy for a couple of years.

And if she is pregnant, I wouldn’t be surprised if that finally have her the incentive to dump Casper. I think even she realizes that Casper would make a terrible father, and she probably realizes that she’s better off raising the kid as a single mother rather than have him be around.