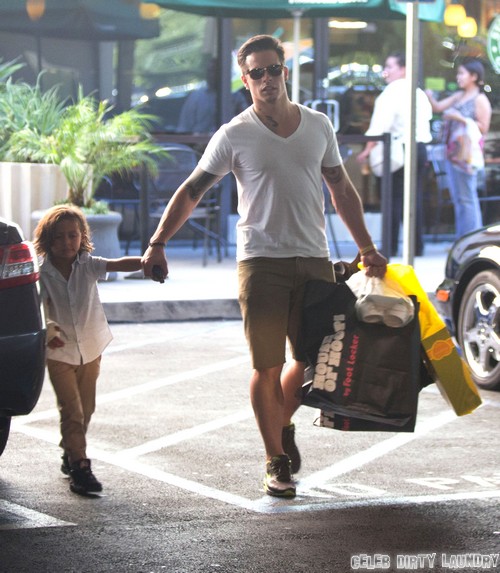 Are Jennifer Lopez and Casper Smart fighting? That’s what the latest report from the National Enquirer is alleging, claiming that Jennifer and Casper are in disagreement over ‘his big mouth’. The headline reads, “Jennifer Lopez is so furious over toy boy Casper Smart’s BIG mouth that she’s cutting his monthly allowance by a hefty 25 percent.”

Apparently, Jennifer was very angry when she found out that Casper had ‘blabbed’ about her returning to American Idol before she could make a formal announcement, and it’s caused her to tighten the purse strings.

A source claims, “Jennifer caught hell from ‘Idol’ producers. They wanted to hold a major press conference, not have a boyfriend leak it out.” Apparently, she’s decided that she’s, “hitting her big-spending boyfriend where it hurts most — in his wallet. Jennifer cut a quarter of his $10,000 monthly allowance she gives him.”

This is hilarious. He’s like the unruly child who’s misbehaved, and Jennifer’s like the mother who’s decided to cut her child’s allowance as punishment. Really, it’s not that far-fetched. Forget the age difference, look at the difference in maturity levels. I mean, I never really understood what Jennifer and Casper were doing together in the first place, and while I don’t believe this story, I’m sure their relationship is considerably lopsided in who gets to make the big decisions. I doubt Casper has a real say in anything.

I also buy that Fox was a little angry about the announcement leaking from Casper, considering that they usually cloak these big announcements with lots of pizzaz and ceremony, and they couldn’t do it this time.

Anyway, how much longer do you think Jennifer and Casper will last? This is almost a personal record for her, considering she barely goes a year into a relationship without getting engaged or breaking up.