Casper Smart Terrified Jennifer Lopez Is Cheating On Him With Pitbull! 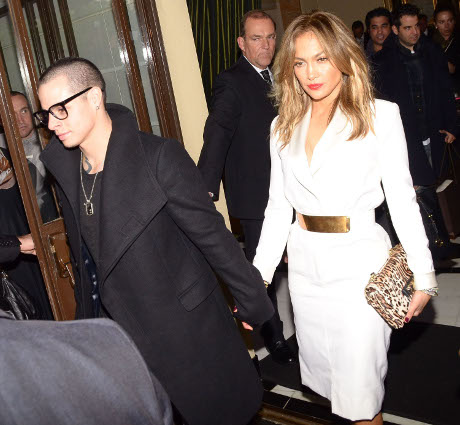 The Enquirer’s source says, “Casper accused his Latin lover of cheating on him with red-hot rapper Pitbull — and she didn’t deny it!” The source adds, “Casper is convinced Jennifer is fooling around with Pitbull behind his back and that he’s on the chopping block. He confronted her and demanded to know if she’s having an affair with Pitbull. Then he ordered her to cut ties with him. Jen was so taken aback that at first she just laughed in Casper’s face.”

The source continues, saying that Casper is starting to imitate Pitbull’s mannerisms to keep Jennifer interested in him, but Jennifer supposedly feels that she needs someone of her own ‘stature’ to get married to.

Ok, so here’s the thing about Jennifer Lopez. She’s dated losers before, but Casper Smart is at a new level, even for her. In addition to that, she tends to fall in love fast, and then fall out of love fast. Frankly, the fact that she’s lasted this long with Casper Smart is a miracle.

I wouldn’t be surprised if Jennifer refuses to marry Casper. I mean, I know it’s her style to marry everyone that she dates, especially when they’ve been going out for this long, but in this case, the tabloids might actually be right – maybe Jennifer realizes that marrying Casper Smart might not be the best thing for her. And I’m not just talking career either. Anyone who’s seen this guy’s interviews can tell that he’s not the sharpest tool in the shed. There’s also the fact that he’s 18 years younger than her and all reports point to him being very immature. Does Jennifer really need a fourth failed marriage? And Pitbull’s exactly her type – successful and powerful in the industry, and she already knows him well after so many professional collaborations.

What do you guys think? You think Casper is just being paranoid? Are Jennifer Lopez/Pitbull dating? Or do you think Jennifer’s through with him and wants to move on? Or is just wishful thinking on all our parts? Let us know in the comments.