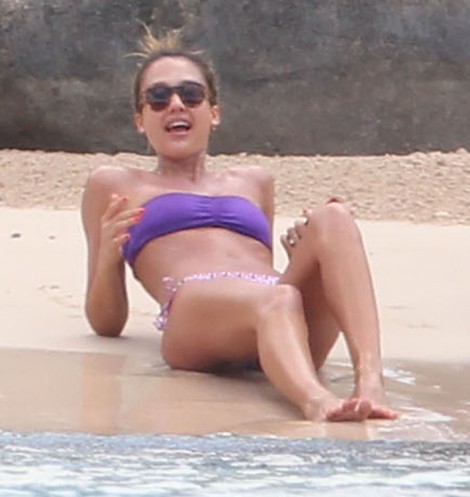 Jessica Alba makes me want to not eat – then workout – then not eat again. God damn girl! That body is out of control and that’s after having two kids! You know who else has two kids, a new book and a lifestyle empire? Gwyneth Paltrow. Just saying….

Can we make this a battle of the holistic lifestyle mavens? I really want to. Please let me without hatin’ too much. It’s just too damn easy!

So Jessica Alba has been showing every bit of herself while on vacation in St. Barts with family and friends. No big deal really. I don’t get the feeling that she’s mugging for the cameras. There’s no LeAnn Rimes vibe hitting me and her bikinis are tasteful and appropriate. I just think the timing is funny since Gwyneth Paltrow’s book, “It’s All Good” was just released and she’s been busy selling her elimination lifestyle along with shots of her incredibly toned legs. Coincidence or conspiracy?

Let’s go with conspiracy. I would never have started the Jessica Alba/Gwyneth Paltrow competition if not for Alba’s recent “my way is more grounded” comments she made while hawking her new book, “The Honest Life.” She told Good Morning America, “Alicia Silverstone is a vegan, so she’s the extreme side of it. Gwyneth Paltrow probably lives a very similar lifestyle, but I didn’t grow up with a bunch of money, so my tips are much more grounded: Repurposing things and making things at home.”

It wasn’t necessarily a slam but it was odd nevertheless. I know what she meant but it just came out wrong and we all jumped on it. If anything, these pics just show you that Tracy Anderson’s way isn’t the only way. You can look amazing without giving up dairy and gluten and sugar and God knows what else. I’ve heard Alba limits her calories to 1200 a day which is dramatic but not that crazy. So I’m guessing her “grounded” message is all about moderation. And she’s keeping at it in St. Barts. I included a pic of her drinking some green concoction Gwyneth would be proud of. You don’t keep that body by slagging off obviously!

So what do you think? Are the Jessica Alba bikini body pics a reaction to Gwyneth’s book launch? Both women’s books are selling well so clearly there’s a demand and Jessica needs to fight for her share of it. Who do you think is selling a better approach? Both women look fantastic but Jessica seems less hard. She is a few year younger though so that should be taken into account.