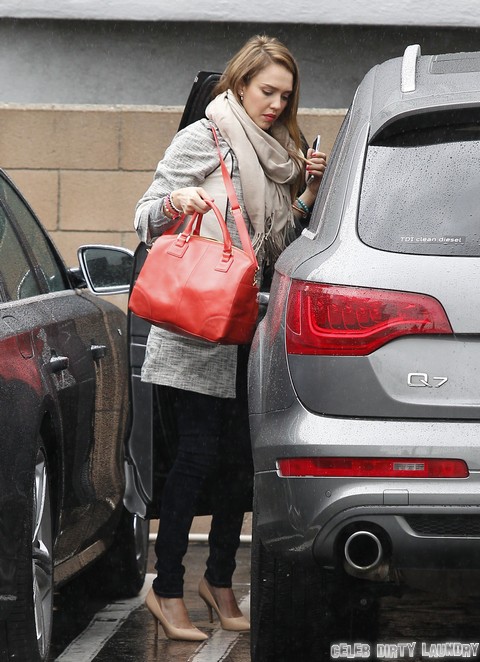 Have you ever woken up in the middle of the night with weird medical symptoms that totally freaked you out? That exact situation happened to Jessica Alba last week. The actress woke at 2:30 in the morning in a panic experiencing what truly sounded like stroke symptoms. According to the March 4th print edition of GLOBE the mom of two thought she was in serious trouble.

“Basically I thought I was having a stroke last week. I really, really thought I was. It was 2.30 in the morning and I woke up and my hand started to go numb. The whole entire thing went numb. It was dead, I couldn’t move it. My whole arm went numb, I got cold sensations in the back of my neck to the front. I can’t move my face.”

Jessica texted her daughter’s doctor for advice and they thought she was a bit young for a stroke to occur. An eventual scan showed that the star actually has carpal tunnel syndrom from her wrist to her elbow and that is what accounted for the numbness that she experienced. Jessica has been spending lots of time on  her computer as she just launched an internet business in the past year. She co-founded The Honest Company which is a subscription service that sells non-toxic baby supplies such as wipes and diapers. Realizing how unsafe a lot of products actually are prompted the mom of two to launch her own business.  She says a lot of her online time is spent trying to track down products that aren’t filled with hidden dangerous chemicals.

Thank goodness Jessica didn’t have a stroke but carpal tunnel syndrome affects millions of people and it’s not a fun thing to have. Of course there’s treatment but what has caused the problem in the first place is probably Jessica’s hours on her computer and if she’s truly invested in The Honest Company then she’s not likely to cut back.

Have you ever had a serious middle of the night scare? Tell us about it in the comments below!

Jessica Alba braves the rain to do some shopping in West Hollywood, California on February 19, 2013.