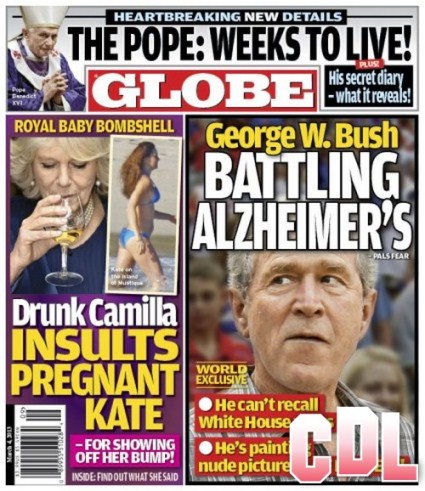 Kate Middleton’s recent luxury vacation in the tropical paradise of Mustique was not an unmixed blessing on the publicity front.  The Palace has fed us the line that poor Kate has been so ill with morning sickness that performing any of her royal duties, which are euphemistically referred to as ‘work,’ have been impossible.  Next thing we know the Duchess of Cambridge is on exclusive Mustique enjoying an active beach vacation.  Whoops.  And how do we know that Kate was active?  Well that’s easy since we have photographic proof of Kate trotting through the surf in a frolic with Prince William!

So it seems like the paparazzi, another tourist, or possibly even a family member managed to catch Kate in compromising baby bump bikini pictures and sell them to the media.  Just what Kate and William don’t need – another photo scandal showing more of Kate to the world than royal propriety and protocol allow.  Of course Camilla Parker-Bowles was one person delighted by the release of Kate’s bikini baby bump photos as she has been desperately searching for dirt she can use to discredit Kate and Will in the eyes of Queen Elizabeth.

Camilla is terrified that once Kate gives birth to an heir to the throne Elizabeth will go ahead and keep her promise to make William King rather than his hapless father, Prince Charles. As GLOBE previously reported, Camilla has gone to great lengths to gather compromising information on her rivals for the throne, even having listening devices planted in Kensington Palace!  Luckily for Kate and Will these bugs were discovered and removed during the renovation process of the couple’s new home but the new photo scandal puts Camilla firmly back in the catbird seat.

So it is without great surprise that GLOBE reports on the cover of this week’s March 4th print edition that Camilla got drunk and went on the attack against Kate.  Camilla suffers from alcoholism and was even dragged off to do a ‘secret’ rehab stint in India late last year.  Once the Duchess of Cornwall got a few stiff drinks down she went on an insulting rampage against a shocked Kate, ridiculing her for parading around in a skimpy bikini showing off her baby bump.  GLOBE’s reliable palace inside sources overheard Camilla’s entire ugly tirade and we will get to read every word of nasty vitriol that she uttered in the print edition.  Those words alone make this week’s GLOBE a must read.

Also in this week’s GLOBE, we also learn that pals fear George W. Bush is suffering from Alzheimer’s disease.  What in particular is raising this concern?  The suggestion is that the former President can’t recall his White House years and even more disturbingly is painting nude pictures of himself. GLOBE will no doubt tell us all the details of this horror story in this week’s issue.

GLOBE mentions on the cover that the soon to be retiring Pope is on the way out of this world.  With only week’s to live, according to GLOBE, Pope Benedict XVI aka Joseph Aloisius Ratzinger, reveals great secrets in his diary!  What do you think the man who has God’s ear reveals to us in his diary?

This week’s GLOBE is a bluckbuster!  Camilla and Kate locked in a bitter battle for royal favor and power promises to be a war that only GLOBE can adequately cover.  With inside exclusive sources right in the palace corridors and their fearless approach to telling the whole truth, GLOBE remains the standout news publication on the market.  Once I finish working today I’ll be buying my copy of GLOBE and sitting down to a couple of hours of entertaining relaxation as I read my favorite magazine.