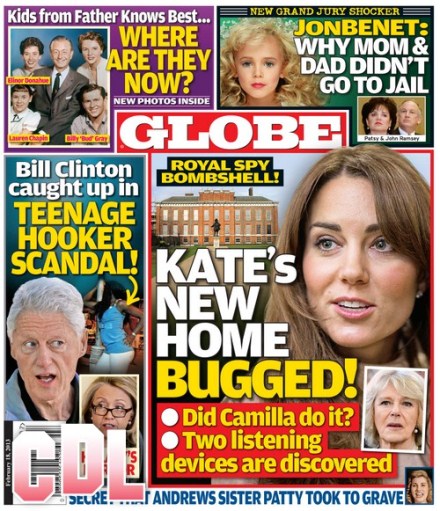 Kate Middleton and Prince William are under attack!  GLOBE reveals that the royal couple’s new home, Kensington Palace, is bugged, and it seems that Camilla Parker-Bowles is the prime suspect for bugger.  According to the cover of GLOBE’s current edition, February 18, two listening devices were discovered right inside the couple’s apartments.  In this royal bombshell GLOBE will explain exactly how and where the royal bugs were discovered and why suspicion naturally fell on evil Camilla.

We can tell our readers that ambitious Camilla has every reason to fear Prince William and the Duchess of Cambridge now that a royal heir in on the way.  Camilla is hoping to discover some dirt on the future King and Queen of England that she can use to poison Queen Elizabeth’s mind against them.  Let’s explain: as we reported previously, Queen Elizabeth promised to make William King over his unpopular father, the next in line for the monarchy, Prince Charles, if Kate could deliver a baby. Elizabeth wants to ensure that her line will continue to rule and a baby from Kate and Will means that the house of Windsor’s monarchy is secure into the next century. Once Kate became pregnant Camilla went into a tizzy, fearing that her chance to be Queen was in jeopardy.  As Camilla realized there was little she could do to stave off failure she hatched a desperate plot!  Camilla decided to bug Kensington Palace, the former home of her arch rival Princess Diana, and hope to have Kate or William say something nasty she could bring to the Queen to get Elizabeth to change her mind about bypassing Charles.

Now that the bugs have been discovered and removed what will Camilla do?  Do you think that there are other listening devices spying on the royal couple?

GLOBE tells us about the secrets Andrews Sister, Patty, took to her  grave.  I wonder what these could be?

We also learn in this week’s edition of GLOBE why JonBenet Ramsey’s parents, John and Patsy, never went to jail. Usually one would think this is because prosecutors couldn’t make a case but perhaps there is more to the story.  We’ll need to read the GLOBE and find out.

GLOBE reports that Bill Clinton is caught up in a teenage hooker scandal! Could this be true?  Only one way to find out – read the GLOBE.

This week’s GLOBE promises to explore the security threat to Kate and William posed by the discovery of listening devices in their home.  This is what I most look forward to reading when I pick up my copy this week.  When I sit down to read GLOBE all my regular concerns fall away as I am transported to a world of discovery and top level entertainment.  I simply never miss reading GLOBE!