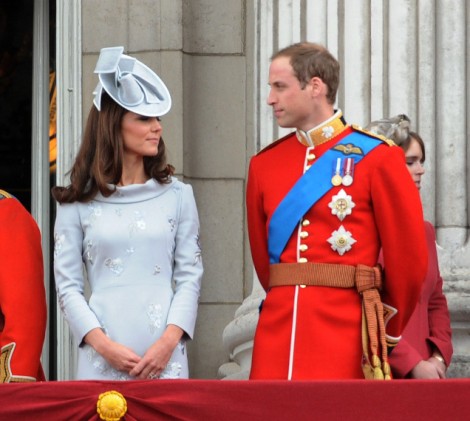 Carole Middleton has just about completed her epic takeover of the monarchy and might be taking up a full-time residence at Kensington Palace this summer. Thanks to Kate Middleton’s loud-mouthed bestie, Jessica Hay, we have the news that Kate is yet again bucking her in-laws’ tradition and considering hiring her mother to work as the royal nanny when the heir makes its heralded appearance this July.

Apparently Kate and Prince William are still freaked out over the pregnancy because of the whole non-stop puking thing and want Carole around after the birth so they don’t have to rely on a relative stranger to look after their kid. You’ll remember the DoCs have never been that big on the whole nanny idea anyway and it’s been thought they were only going to hire one part-time at first.

OK, let’s think about this. First of all it’s Jessica Hay and that’s hit or miss. Sometimes that mouthy biotch is right so we can’t discount EVERYTHING she says but she shouldn’t be bible either. For Kate’s sake I hope this story is only remotely true. There’s going to be hella backlash if her mom starts calling Princess Diana’s former house home. There aren’t many out there who’ll think it’s a great idea for the future monarch to be raised by a former flight attendant over a proper British nanny, grandma or not. She’ll probably stick around for a few weeks and then make herself more sporadic after that. What chick doesn’t want her mom around to help out after she has her first kid? And what first-time grandma is going to stay away anyway? And Kate’s situation is anything but ordinary and her bundle of joy is anything but normal. There’s going to be some crazy hormones and some crazy pressure flying around. Obviously William is hoping Kate Middleton’s mom will help the transition. Diana didn’t have that, that’s for sure.

It could be a privacy issue as well. Who knows how Kate is going to handle those first few weeks after the baby makes its appearance? Everything could turn out perfect but she could be uber depressed and cry all the time too. It happens. Would you want anyone besides family around when you weren’t acting like your best self especially when they can sell stories for tons of money? And we know what a control/image freak Kate is. So I actually think this is a good call for a short period of time so the parents can get their bearings. But the second Carole Middleton (royal nanny) starts overstepping her welcome you just know everyone’s going to have something to say about it – again – grandma or not.

Do you agree with the Kate Middleton/nanny choice? Is this the best decision for Kate who already has  the reputation of being too dependent on her family?