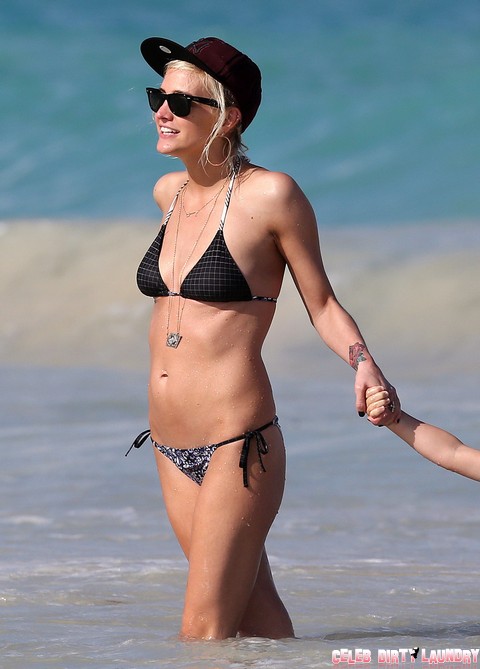 Jessica Simpson has been struggling very publicly with her post/pre baby weight loss, and her sense of fashion has plummeted since the major weight gain hit last year. The engaged celeb has been rocking knee length dresses, muumuus, and one piece swimsuits. There’s nothing wrong with that—unless your fiancé is checking out your baby sister! Apparently, Eric Johnson only had eyes for Ashlee Simpson while on a family vacation to Hawaii.

A friend reported to Star Magazine, print edition January 14, 2013, “Jess caught Eric staring at Ashlee, and it drove her nuts. Ashlee wore these teeny bikinis in front of him, while Jessica was in a huge cover-up.” The cover up, of course, is entirely Jessica’s choosing—plenty of pregnant women (and pregnant celebs) rock the teeny bikini and big pregnant belly, and it looks fine! It says “I’m here for beach fun, and bikinis are what you wear to the beach. Even if you’re pregnant and feeling a bit chubby.”

Unfortunately, Ashlee is doing nothing to help Jessica win her case with Eric, and is actually enjoying the fight! “Ashlee has always come second,” the friend explained, “but for once she is the one getting tons of attention, and was making the most of it.” Can’t blame a girl for enjoying a family trip to the beach, can you? Besides, it’s not like she can accuse Eric of anything. She needs to leave the situation alone and let them work it out. Once a cheater, always a cheater! And if Eric has wandering eyes this early in their family-building, just think of all the diapers and stressful days to come! He’ll be looking anywhere other than Jess!

Jessica confronted Eric, but “he said he is the one always taking care of the baby, so if he and Ashlee were playing with their kids together, it’s not like he can avoid looking at her. If Jessica took care of Maxwell, he wouldn’t have to spend so much time around Ashlee.” Excellent manipulation tactic on his part! We’ve heard rumors of a February wedding, but I’ll bet a fight like this will push the wedding back until after baby number two is born! Would you stay with a guy who checks out your sister while you’re carrying his baby? Is Eric only human?