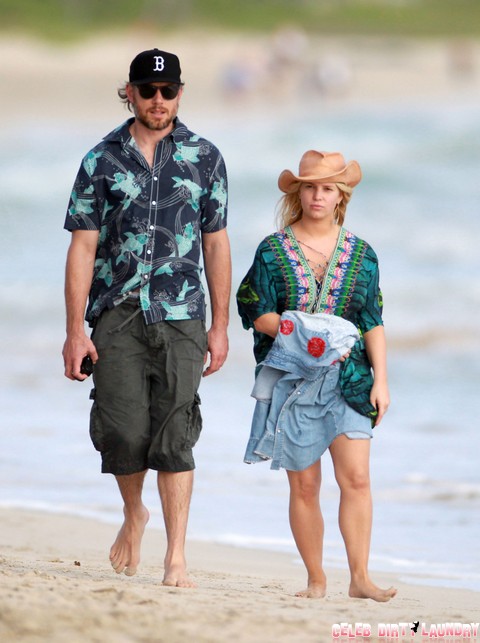 Jessica Simpson is going to have a double-barreled shotgun wedding in early 2013. Jessica’s weight has been the center of a lot of controversy. After giving birth to her first child, Maxwell, she lost a reported 60 pounds. But she’s struggled to keep the weight off, leading to speculation that she would lose her contract as a Weight Watcher’s spokes woman. Now that’ she’s finally confirmed her second pregnancy with fiancé Eric Johnson, wedding rumors are buzzing, and a friend breaks down the wedding timeline.

The friend explained Jessica’s wedding plans to inTouch Weekly, print edition January 7, 2013. “Jessica knows that she needs to get married in the next 60 days, which isn’t likely, or wait until 2014. She wants to look as good as she can on her wedding day.” So how is this going to work? Will she op for an early, rushed wedding before the baby bump shows, or decide to postpone until after baby number two is born.

With Jessica’s family crumbling around her, I think she’s got to be feeling really sentimental and blessed for her fiancé and daughter. Wouldn’t this mean she wants to incorporate as much of her family as possible into her wedding? It is, after all, the final cementing of their family. I would expect her to wait until 2014 for the wedding. That way, both children can be there (great photo op!), and maybe some of the drama surrounding her dad Joe Simpson‘s gay sex scandal will have blown over so her parents can come.

Family aside, the premiere of her white dress will be a Weight Watcher’s commercial made in heaven—way better than her last one, in which she announced her pregnancy while standing in a truck. In fact, I wouldn’t be surprised if there’s a line in her contract that ties her to a post-diet Weight Watchers wedding. Think on it: it’s the ultimate ad. A woman gets pregnant, has a baby, and then successfully drops the baby pounds with Weight Watchers, all to have a perfect wedding day! Do you think Jessica will sprint to the altar, or wait it out?

Singer Jessica Simpson and her fiance Eric Johnson enjoy a romantic, post Christmas day walk along the shore on Oahu, Hawaii on December 26, 2012. The smiling couple has a lot to be happy about these days… Jessica confirmed the rumors via Twitter that she’s pregnant with their second child!