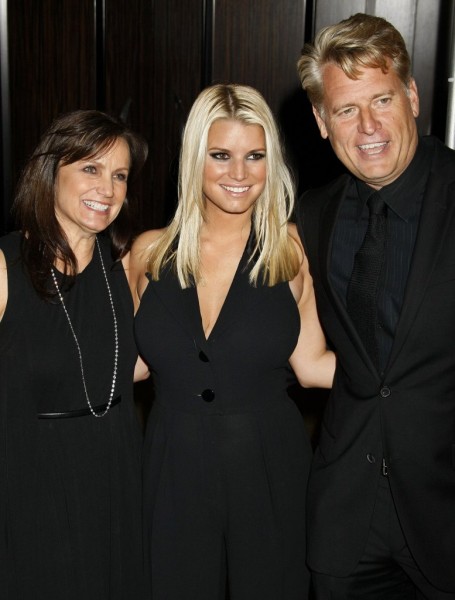 It’s too bad Jessica Simpson’s baby news is getting marred by her family issues right now. How can you be completely happy over your ever growing bundle when your dad might be a closet homosexual dating 30-year-olds and your mom’s developed a drinking problem to deal with it? I like to rip on Jessica Simpson just as much as the next person but I can’t even bring myself to do it here.

But Jessica’s dad is trying to solve everyone’s problems with an open marriage! Joe Simpson thinks that would be the perfect way to have his cake and eat it too. That little info is a gift from the National Enquirer this week. Only, according to Radar, Tina Simpson’s developed a taste for whiskey.

“Tina is hitting the bottle to ease her sorrows over her marital problems, she’s built up quite a tolerance and has switched from wine to stuff like scotch and vodka,” a source tells Star. “Jess is just a mess over this, she feels helpless and doesn’t know what to do.”

Apparently Tina’s not down with the open marriage idea because it would be more lying and Joe’s trying to screw her (figuratively, not literally) financially in the divorce settlement. “She’s unleashed her lawyers in what’s bound to be a nasty divorce because Joe’s trying to deny her any money – a dangerous strategy! Tina’s lawyers are already interviewing young men Joe counseled over fifteen years as a Baptist minister in Texas. He’s shown a propensity for younger guys; the man he’s reportedly dating is 30 years his junior. And he even took wayward youths – like bad-boy actor LANE GARRISON – into his home. Now Tina’s lawyers are asking the guys if Joe ever initiated inappropriate contact. They think there’s something there that could be used against Joe if he doesn’t accept a more equitable financial split in the divorce.”

This all sounds like it’s going to be good and messy and I think it’s already affected one of the Simpson girls. Ashlee just broke up with long-time boyfriend, Vincent Piazza. I have no idea if one had to do with the other but the timing wasn’t great that’s for sure. Do you think Jessica’s relationship with her baby daddy will make it through. I know a lot of us wanted her to ditch him a long time ago but, given that she’s pregnant again, now wouldn’t be the best time, right? Why did Jessica have to be so damned fertile?

Is Tina Simpson hitting the bottle? Is this why Jessica stayed away from nephew Bronx’s birthday party last month? Is her family too much to deal with in her condition?