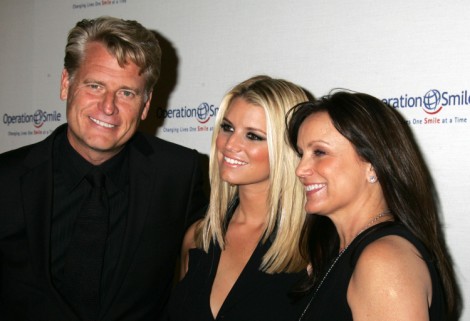 Jessica Simpson had no idea her dad was gay. It seems the earring, the frosted tips, the spiky hair, and the creepy boob comments were all just completely normal for a southern baptist minister turned pop star manager. But really, you can’t blame her, right? Who ever had gaydar on their dad? Most kids only believe in the immaculate conception because they refuse to picture their parents ever having sex anyway. So the fact that Jessica Simpson is reeling over the Joe Simpson gay news doesn’t surprise me at all. Lest we forget, this is the woman who ate tuna from a tin and thought it was chicken until Nick Lachey told her otherwise.

“Jessica had absolutely no clue that her father was gay, not even the slightest inkling,” a source told Radar. “She thinks she has very good gaydar, especially since a lot of her friends are gay, but she did not see this coming at all. It was a complete shock to the system, she feels terribly for her mom who was left reeling by the announcement and her sister Ashlee has also taken the news quite badly. Jessica’s been trying to process the information slowly, but she’s having difficulty dealing with it. She can’t understand why Joe stayed married to Tina for so long, and can’t help wondering how much of their life was a lie. Despite that, she’s going to stand by him and support his decision. After all, he’s still her father and Joe’s always been there for Jessica whenever she’s needed him… And not just as a father, but as her manager too.”

Does this remind anyone else of the episode of Girls when Elijah tells Hannah he thinks her dad is gay? They get into this awesome fight and he ends it with, “I’m gonna go now, your dad is gay.” Brilliant. That was definitely the funniest scene in the whole first season.

But I’d be remiss in pointing out we don’t know if Joe is actually gay. Rumors that he has a 20-something boyfriend emerged yesterday and then news hit that he and Tina were filing for divorce which led a lot to believe the gay rumors had to be true. But no one knows for sure. It seems pretty believable. But who knows? However, if it’s true, is it safe to assume Jessica’s off the wagon? How can you keep to a diet when your dad outs himself? I’d be stirring the brownie mix with one hand and dropping in crushed up Orioles with the other, while my Chardonnay was chilling in the fridge. I’m just saying… this is no easy situation and a happy happy family isn’t just going to re-bond together over night. Jessica might still be in the numb faze. She hasn’t had a chance to get angry yet.