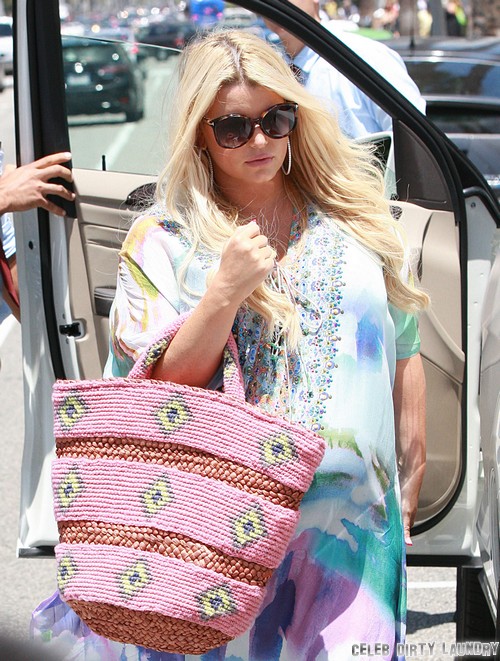 Jessica Simpson‘s weight is often at the center of tabloid speculation, and that clearly hasn’t changed. According to the latest report from Star Magazine, Jessica has been given an ultimatum by Weight Watchers to lose her pregnancy weight or she’ll lose her deal.

As we know, Jessica has a deal with Weight Watchers, which was put on hold when Jessica got pregnant with her second child. However, the report claims that the executives at Weight Watchers want Jessica to get back in shape ASAP so they can air ads. The report also adds that they’ve threatened her with dumping her contract if she doesn’t comply with their demands, which could end up losing Jessica millions of dollars in contract salaries.

A source adds, “Jessica is having a hard time sticking to the program, so the contract could be in jeopardy.” While Jessica claims that she strictly follows the Weight Watchers plan, there’s obviously no way to prove that, short of videotaping her doing it. However, she definitely has lost a ton of weight since giving birth to her second child, so I’m curious about the timing of this report. Did they write this before she had made any public appearances? Or is the report trying to imply that Jessica could gain to lose a few more pounds, and this is their way of pressuring her?

Either way, it’s a low blow from Star. If she hadn’t lost any weight and was still under contract with Weight Watchers, I could perhaps see this being a conversation. But since she has lost weight and is actually looking better than she has in a while, I don’t see why Weight Watchers would be giving her ultimatums.