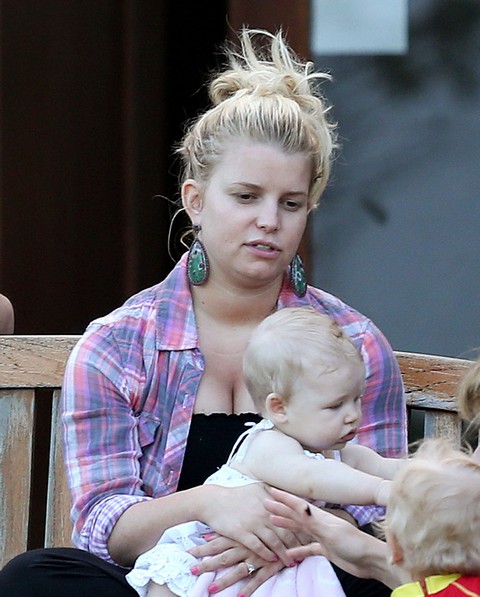 During her first pregnancy, Jessica Simpson put on weight like it was going out of style. The first time mom lacked the tools to build a healthy diet and exercise plan, leaving her more than 70 pounds overweight after Maxwell’s summer birth. Now that she’s pregnant again, and has extended her contract with Weight Watchers, Jess is more determined than ever to maintain a healthy lifestyle and weight.

An insider explained her resolutions to Life & Style, print edition January 21, 2013. “Hearing all those fat jokes for so long and being a laughingstock hurt her. She laughed everything off and pretended the jabs didn’t hurt, but they did. She’s not going to cut loose like she did last time. She’s going to be more in control.” I expect her goal is somewhat tied to reports that fiancé Eric Johnson was checking out baby sister Ashlee Simpson while on a Hawaii vacation. Rumor has it, Jess wants to slim down, ensuring she’ll be the only woman he has eyes for.

Because Jessica was still losing weight when she got the news of her second pregnancy, she’s hoping to only gain 25 pounds this time around. But she’s intent on gaining weight through healthy foods, not junk binges. “She learned a lot while losing the weight she gained with Maxwell,” the insider dished. “She knows about empty calories and portion control. Before, she knew very little about nutrition. Instead of mac ‘n’ cheese, she’ll have brown rice with vegetables.” I understand that Jessica doesn’t have a degree in nutrition, but it doesn’t take a genius to know that vegetables are good, while pasta in cheese sauce isn’t!

Jessica is also determined to stay fit during this pregnancy. “She won’t sit on the couch like before,” a pal confirms. “And once she has the baby, she’ll definitely go back on Weight Watchers. She likes working with them.” We’re excited for Jessica’s family (and wedding! When is that even happening?!) and hope she gets proper nutrition (from her new Weight Watcher’s chef!) and exercise counseling during her second pregnancy!