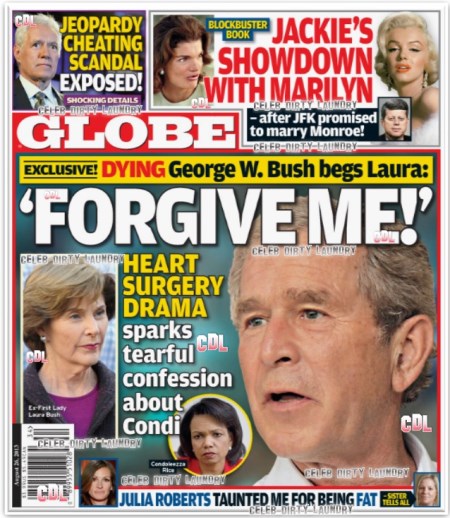 Isn’t it something how 50 years later, people are still somewhat obsessed with John F. Kennedy and his triangle with his wife, Jackie Kennedy and Hollywood sexpot, Marilyn Monroe?  A new book by Darwin Porter is catching headlines and attracting readers because it gives a detailed account of JFK’s doomed love affair with Marilyn and how Jackie flipped out and confronted the silver screen star. According to the Aug. 26th print edition of GLOBE Magazine, the affair was inevitably going to be revealed and at one point JFK even led Marilyn to believe that he would leave his wife for her.

Marilyn believed that she would one day be the president’s wife and when it finally became clear that it was not really the case she melted down. According to past GLOBE articles, Marilyn slept with both JFK and his brother, Robert F. Kennedy as well. She was passed between the two and finally broke down screaming after realizing that the promises were lies. It is rumored that RFK tried to quiet her by putting a pillow over her face and accidentally smothered her. This rumor is supposedly substantiated by audio tapes that back up the claims. It seems that if you put all of GLOBE’s sources and articles together on the JFK/Jackie/Marilyn triangle you really could end up with some resemblance of what really transpired!

Also in the Aug. 26th print edition of GLOBE is an article that alleges that George W. Bush may have had an intimate relationship with Condoleezza Rice. According to sources George actually asked his wife, Laura Bush for forgiveness before his heart surgery. Apparently the former president feared that he may not make it out of surgery and needed to come clean before going under the knife.

Have you heard of Nancy Motes before? She is Julia Roberts step-sister and she claims that the Hollywood A-lister has long ridiculed her for her weight. Apparently now that Nancy has dropped serious pounds she believes that Julia will love and accept her. I highly doubt it’ll work out that way but you can read all of the details on this in the new issue of GLOBE that should be hitting newsstands any time now! As usual the magazine is on top of all of the latest gossip plus has the details on Hollywood and political scandals as well!

GLOBE is the magazine I trust to unearth the truth about those stories that timid news services fear to report.  Nobody but GLOBE has the courage and resources to expose those sensitive issues like love affairs at the very highest levels of government and stardom.  I’m hurrying to finish here at work so I can head out and get my copy of GLOBE.  Then I’ll be ready to enjoy hours of exciting reading!