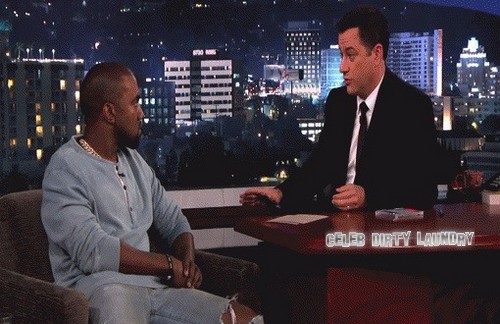 Tonight on JIMMY KIMMEL LIVE Jimmy will be welcoming Kanye West.  This will be the first time the two have come face-to-face since he went on a twitter rant against Jimmy last month.

Kanye was not thrilled about a spoof that Jimmy created about a BBC interview Kanye had given.  I understand why Jimmy did it, he just could not resist, Kayne made comments like he was the, “biggest rock star in the world.”  Clearly, Kanye has a huge ego, but a small sense of humor.  Instead of taking it all in good fun, Kanye decided to head to twitter and unleash a twitter rant some of which follows:

The rant went down something like this. “JIMMY KIMMEL IS OUT OF LINE TO TRY AND SPOOF IN ANY WAY THE FIRST PIECE OF HONEST MEDIA IN YEARS. JIMMY KIMMEL, I DON’T TAKE IT AS A JOKE…. YOU DON’T HAVE SCUM BAGS HOPPING OVER FENCES TRYING TO TAKE PICTURES OF YOUR DAUGHTER. I LIKE YOU,  YOU KNOW ME,  I WENT TO YOUR FAMILY’S WEDDING WHO YOU MADE IT CLEAR TO ME WASN’T YOUR FAMILY WHEN I WAS ON THEN PHONE WITH YOU 5 MINUTES AGO, YOU MANIPULATIVE MEDIA MUTHERF**KER.”

After the rant Kanye apparently called Jimmy and demanded he apologize, no word on if that has happened, but I doubt it.  With Kanye appearing on his show tonight I have to assume that Kanye is backing down with his demands.  I cannot wait to see what happens on tonight’s show.   What do you think CDLers, are they going to fight it out or is Kanye going to hold his temper and calm down?

Jimmy Kimmel live airs tonight at 11:35PM and Celeb Dirty Laundry will be bring you the recap with all the exciting highlights!! Don’t forget to come back, you just know it is going to be juicy!

Tonight the great debate of Kanye vs. Jimmy begins. Jimmy opens his show by admitting to how far his argument with Kanye has gone already. Flashback of tweets and SpongeBob gifs created by Kanye make him and his audience laugh. After all he’s looking forward to talking to Kanye and even though the male diva is backstage with family in tow doesn’t mean Jimmy has given up making fun of him. The fight may be real but Jimmy won’t take him seriously.

Kanye West put in the same sentence of upcoming attraction of artic monkeys means so much more than Jimmy is probably aware of! Kanye arrives on set and it begins cordially. They shake hands and sit down and try light chit chat. Kanye speaks very little to the point Jimmy cracks a joke. Kanye is more making noises than talking. As a matter of fact he seems shy and awkward.

When the mention the phone call, Kany explains that the Jimmy he knew and he felt would understand shouldn’t have done the skit and he goes as far to say he to their talk back to high school. Jimmy agrees that sometimes don’t realize that celebrities can get hurt but at the same time Kanye invites this on himself. He always personally liked Kanye. Although Kanye tends to veer from subject to subject so fast you’d think he was all over the place, he does make one point in his favor. You’re either going to love him or hate him but he’s going to be him without a single thought in your direction.

By the way did you know people were telling him they were never going to give Kim Kardashian a star on the walk of fame? It’s not important to him and yet he feels her reality TV star status shouldn’t have stopped that happening for her. Again he is all over the place. It’s a pattern for him. He goes off that he’s a genius and other incomprehensible nonsense and name dropping until he throws his love for Kim at the end.

Kanye most likely thought there wouldn’t be any more sketches the he saw Josh Groban singing his tweets. He can laugh there and enjoy it better than before. Another to laugh at was when Jimmy asked if he really did look like SpongeBob. Kanye said it was the first thing he thought of. He was actually having fun by that point. He thought it be too funny to do that and watch people try to react to it.

As everyone is watching Kanye talk about fashion, Jimmy faces says it all. WTF?!?! How come he never sticks one subject at a time much less get on a soapbox on how society is trying to ruin his genius. Jimmy must have gone to happy place in his mind in order to come up with a throw-in chuckle. Sure there is a point in there but as Jimmy says Kanye brings criticism on himself. The paparazzi do wind him up and as he says he’s from Chicago but he needs to stop marketing himself as the savior. When he does goes there people tend to think he’s an ass and feel completely justifies in that opinion.

The thing with Kanye is everyone who meets says he’s a nice guy but give him a limelight and a jerk emerges. His heart is in the right place but half things he says can only be forgiven if it came from someone with Tourette syndrome. Harsh but true!

Check out the full interview below!