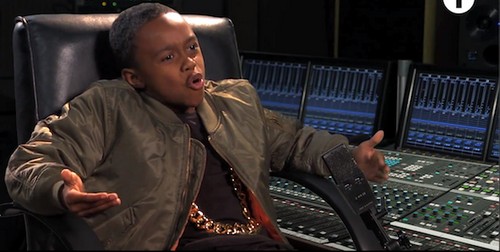 Kanye West is a veteran of the celebrity feud, and he’s embroiled in yet another one – this time, with Jimmy Kimmel. Jimmy Kimmel is famous for creating spoof videos to mock celebrities that he thinks are taking themselves too seriously, and Kanye West falls squarely into that category. Kanye’s latest BBC radio interview was ripe for mockery, and Jimmy took the opportunity to hire a little kid to recreate a spoof version of that interview.

Kanye was not happy about this spoof, and he went on a Twitter rant [surprise, surprise], saying, “JIMMY KIMMEL IS OUT OF LINE TO TRY AND SPOOF IN ANY WAY THE FIRST PIECE OF HONEST MEDIA IN YEARS. JIMMY KIMMEL, I DON’T TAKE IT AS A JOKE…. YOU DON’T HAVE SCUM BAGS HOPPING OVER FENCES TRYING TO TAKE PICTURES OF YOUR DAUGHTER.” Kanye also added, “I LIKE YOU,  YOU KNOW ME,  I WENT TO YOUR FAMILY’S WEDDING WHO YOU MADE IT CLEAR TO ME WASN’T YOUR FAMILY WHEN I WAS ON THEN PHONE WITH YOU 5 MINUTES AGO, YOU MANIPULATIVE MEDIA MUTHERF**KER.”

Damn, Kanye can’t take a joke, can he? Jimmy, for his part, didn’t seem that worried about Kanye’s vitriol. He revealed on the show last night, after Kanye apparently called him to say, “He told me I had two choices – #1 Apologize publicly. And that was really the only choice.”

Jimmy also adds that this feud was not planned or pre-written, and he’s surprised by Kanye’s anger, saying, “I don’t know why he’s angry. The bit was pretty innocuous.”

Um, has Jimmy ever met Kanye? This is the same guy who went on stage and grabbed another person’s award because he felt she didn’t deserve it. This is the musician that constantly refers to his own genius every chance he gets. Why on earth would he take this lightly? I’m glad Jimmy did the bit, and I think it should have served as a reminder to Kane to not take himself so seriously. Unfortunately, Kanye’s incapable of seeing the humor in the situation, so his reaction doesn’t really surprise me.