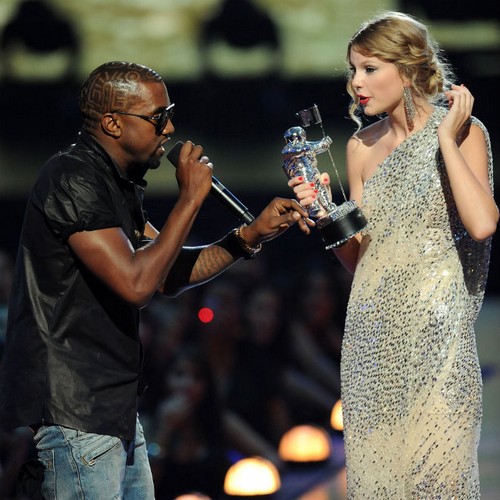 So you guys all remember that incident where Kanye West interrupted Taylor Swift at the 2009 VMAs, leading to many hilarious GIFs and memes? Well, Kanye apologized but then took back his apology last year, saying that he didn’t feel like his apology was honest. But the best part of all this is that someone recorded Kanye West ranting about the incident after it happened, and the audio has now been released.

It hasn’t been confirmed that it was Kanye but if you listen to him on the tape, there’s little doubt that it’s actually him. In addition to dissing Taylor Swift, Kanye also rants about P!nk, and how it was unfair that both Pink and Taylor got to perform during the VMAs when he was left out.

He said, “When I heard Eminem’s verse on the Drake sh*t, I went back and rewrote my sh*t for two days. I canceled appointments to rewrite! I f**kin’ care! Because I did that, Taylor Swift cannot win over Beyoncé! Because I wrote my verse in two days, Taylor Swift cannot beat Beyoncé. ‘Cause there ain’t gonna be no more motherf**king Elvises with no James Browns.”

He also added, “What the f**k was Pink performing? Don’t nobody know that song. Pink performed twice! Two songs? How the f**k Pink perform two songs and I didn’t even get asked to perform ‘Heartless.’”

Oh, Kanye. You have to admit, Kanye is never short on entertainment value. Regardless of whether this is him or not, it’s a pretty spot-on imitation because this exactly the kind of thing Kanye would say.

What do you guys think about Kanye ranting about Taylor Swift and Pink? Do you think it’s actually him, and do any of you actually agree with what he’s saying? Let us know your thoughts in the comments.