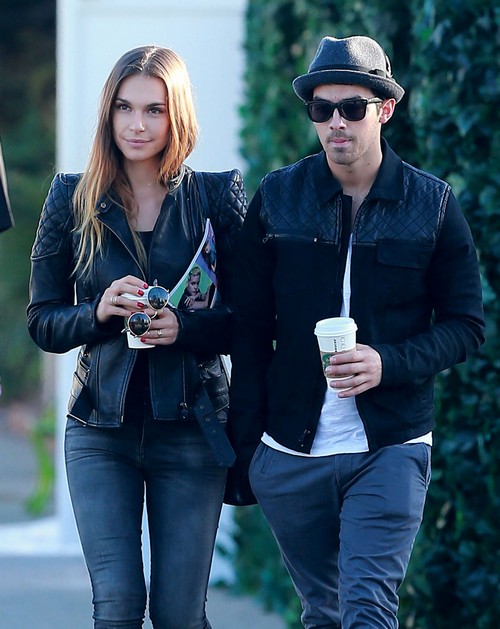 Musical differences my ass. The real reason that the Jonas Brothers pulled the plug on their 19 city tour this week is very simple – Joe Jonas is spinning out of control and can’t be counted on to show up and perform. He was photographed on Thursday being trailed by Mike Bayer, a well-known addiction coach that also helped Demi Lovato stay clean a few years ago. If Joe wanted help or was truly acknowledging a real problem then he would have checked himself into rehab by now, right?

Instead the Jonas family hired the massive Bayer to keep an eye on their son. I guess the thinking is that if they can’t get him into rehab then they can try to control the influences that surround him but even that plan was short-lived. Joe gave Bayer the slip – or simply told him to take a hike (since Joe still has legal control of himself Bayer would need to back up or else he could be arrested) as he hooked up with Blanda Eggenschwiler. The two have been hot and heavy for nearly a year now and it seems to be Blanda that has introduced Joe to a life of hard partying and homemade sex tapes.

The couple were spotted kissing in West Hollywood yesterday, making it very clear that Joe has no intention of giving up his lady love or any of the vices that she has introduced him to. Needless to say the family is fuming because not only is Joe’s well-being at risk but the whole Jonas family brand is being compromised. A canceled tour is a huge problem. There was a lot of money invested in the show and everyone has now lost a nice chunk thanks to Joe’s addiction issues. Will he decided to save himself and the family brand or is this situation going to get worse? Tell us your thoughts in the comments below!