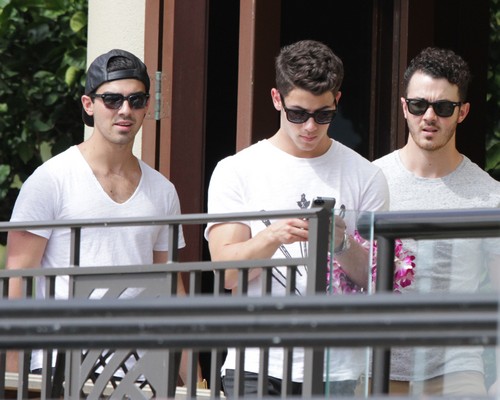 Well, that whole comeback thing didn’t last very long, did it? The Jonas Brothers have been extremely busy with promotion the last few months, and everything was in service of their ‘comeback’. Their comeback tour, their comeback album – it was supposed to be massive, and prove to audiences that they were still a global brand that could sell tickets and incite a mass frenzy wherever they went.

However, whether it was because of the lack of interest or their own personal problems, we’re hearing that the Jonas Brothers have officially broken up. According to sources at Q102, there was too much fighting among Kevin [Jonas], Joe [Jonas], and Nick [Jonas] and they have decided to permanently part ways. That means the tour is cancelled, and until further notice, so are any other public appearances with all three of the brothers present.

The next stop the brothers were set to make is in Philadelphia on Friday, at the Tower theater. Sources claim that there’s no way the boys will resolve their differences by then, and in fact, it’s looking like they might actually be done for good.

Is it the end of an era? Will I be vilified if I say that the Jonas Brothers were the giant, lackluster ‘meh’ that came in between The Backstreet Boys and N’Sync and now One Direction and the Wanted. The Jonas Brothers were basically the in-between placeholder until someone far more interesting came along.

What do you guys think of the Jonas Brothers breaking up? Were you a fan, or could you care less? Let us know your thoughts in the comments.