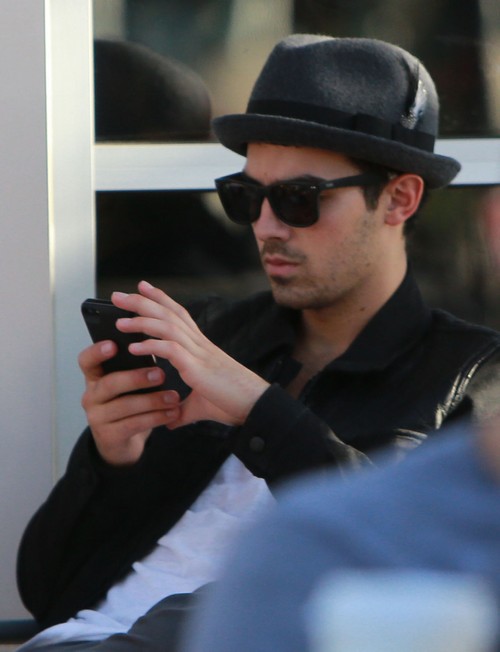 We always knew Disney kids weren’t as squeaky clean as they claim to be. At least, I never fell for it. And now Joe Jonas is speaking out about his crazy, drug and sex filled Disney days with his brothers, Miley Cyrus, and Demi Lovato. The Jonas Brothers officially broke up one month ago and the newly free Joe has written a long essay in the New York magazine revealing what is really like being a “Jonas Brother” and being part of the Disney manufactory.

Disney has always been said to be the “happiest place on earth.” Now we know why. According to Joe, it was Disney kids who introduced him to drugs. “The first time I smoked weed was with Demi and Miley. I must have been 17 or 18. They kept saying, ‘Try it! Try it!’ so I gave it a shot, and it was all right.” Now he only smokes weed occasionally.

He was caught drinking when he was 16 or 17. But he was in a different country where it was legal. He passed out and fell down a flight of stairs on his 21st birthday. Like weed, he says he “appreciates wine or a vodka-soda every once in a while.”

Disney kids also have been known show-off their sexy side. Remember Vanessa Hudgens and her nude photos? When those photos leaked online, Disney execs actually praised the brothers for being well behaved and they felt even added pressure be perfect. That’s one of the reasons their infamous promise rings got so much news coverage.

“Because of our age, because of Disney, because of those (promise) rings, there were so many things throughout our career that we had to sugarcoat. If a lyric was slightly sexual, someone at the record company would tell us we had to change it”

But Joe reveals those rings were really just from a program they did before they were famous and really didn’t mean that much. He actually lost his virginity at 20. He did “other stuff” before then, but was sexually active at 20. Joe doesn’t say who the girl was, but we can guess it was his then-girlfriend and vampire, Ashley Greene. He also talks about frequently having multiple hook-ups and dating fans.

Joe also goes into detail about what is was like always being micro-managed by Disney. The brothers released their first album in 2006 after spending two years working on it. They performed small gigs under the name “J3” and Joe eventually changed it simply to “Jonas Brothers.” Everything changed when they started performing at Disney events and recorded the song Year 3000 exclusively for Disney. The song was played on Radio Disney and the Disney Channel and their fame exploded from there.

“We went from an opening act to headliners, first in half-theaters, then full theaters, then half-arenas to full arenas, all within a span of around six weeks.”

They then appeared on Hannah Montana as themselves which led to their own sitcom. Joe saw problems at the very beginning. He said the scripts were horrible and they made him pretend he was a 16 year old kid when he was really 20. But you know the first rule of the Disney factory: Do as Mickey says or head over to Nickelodeon with Amanda Bynes and Jamie Lynn Spears.

“We went along with it at the time, because we thought Disney was our only real shot, and we were terrified that it could all be taken away from us at any moment,” Joe said.

Disney handled every aspect of their careers and always go the last word. They had to attend media training and learned how to answer questions and change the subject during interviews. They even had a strategy where each brother was responsible for answering certain topics.

Joe’s first solo album was never released by the label because it sounded “too weird” and they wanted him to work with Disney-approved writers and artists. The album that was released featured a song with Lil Wayne and contained the word, “bitch.” This caused the album to have a parental advisory label and the album did not sell well.

“I think it was rushed, and I couldn’t speak up because I was scared to. They wanted me to be this Justin Timberlake clone. Even one of the heads of Hollywood Records said, ‘He’s the new Justin Timberlake!‘”

He goes on to write why Disney stars like Miley Cyrus begin to experiment once they leave the Disney cult. “Being a part of the Disney thing for so long will make you not want to be this perfect little puppet forever. Eventually, I hit a limit and thought, Screw all this, I’m just going to show people who I am. I think that happened to a lot of us. Disney kids are spunky in some way.“

Now that the Jonas Brothers have broken up and parted ways with Disney, we might see a different (and in my opinion, more likeable) Joe. I’ve never thought he could sing in the first place, I think it’s good he’s taking control and managing his own career. What are thoughts on Joe Jonas opening up about his Disney days? Join the conversation and leave a comment.