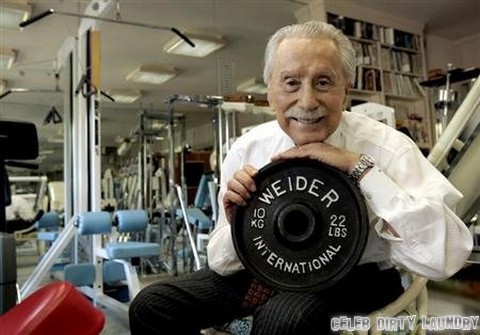 Joe Weider, a self- made man who oversaw such publications as Muscle and Fitness, Shape and Men’s Fitness through his Weider Publicans died Saturday, March 23. The bodybuilding icon was 93.

Weider was a rags to riches story, having escaped a rough neighborhood in Montreal, Canada where he was born in 1920. He grew up dirt poor to parents who fled from Europe to flee the anti Semitism. The Jewish family couldn’t speak English and their children were bullied. According to a biography on Weider, he and his brother started lifting weights in order to protect themselves. The self preservation led to the genesis of his empire and he began competing professionally. By the 1940’s, Weider started his premiere magazine, Your Physique. It was the first of many titles that helped form Weider Publicans which he eventually sold in the 2000’s to American Media Inc.

He and his younger brother Ben also rented Montreal’s Monument National Theater in the 1940’s to host the first Mr. Canada contest.

The most definitive moment of the upstart’s career came when he and his brother founded the International Federation of Bodybuilders.  In, 1965 Weider created the Mr. Olympia completion.

Arguably, his great find was Arnold Schwarzenegger who was then a muscular unknown to the world.  He convinced the Austrian to make the move to the U.S. for more prominence mentoring him once he came to the land of opportunity of which there were plenty for him. Arnold won a string of body building competitions, starred in movies such as Conan the Barbarian and even wed a Kennedy, Maria Shriver. Another great feat to add to Arnold’s resume was his election as California’s Governor in 2003. He served two terms. Arnold released a statement on Weider’s passing.

“Joe Weider was a titan in the fitness industry and one of the kindest men I have ever met,” Schwarzenegger said in a statement posted on his official website.

“He leaves behind a fantastic legacy of a fitter world,” he said.   “Very few people can claim to have influenced as many lives as Joe did through his magazines, his supplements, his training equipment and his big-hearted personality.”

Weider is survived by his wife Betty Weider to whom he was married to for more than 50 years.   Without Joe Weider modern bodybuilding and fitness would not be what it is today.