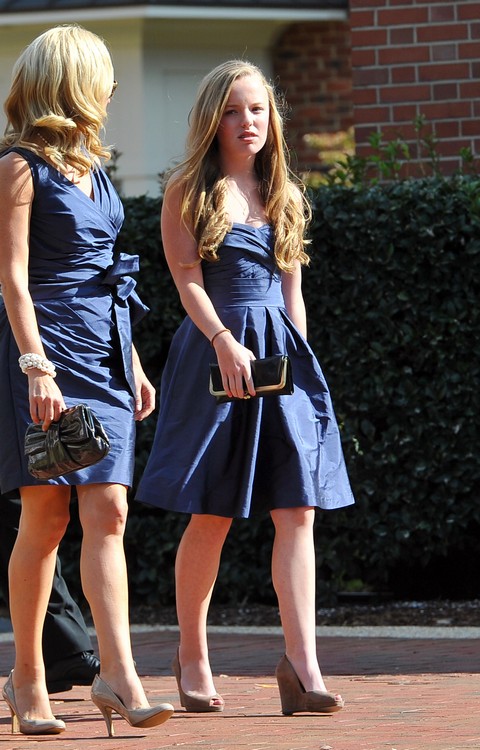 Love or hate his politics, John Edwards seems like a total jerk, and now his daughter is all over the internet showing what a terrible father he is! Edwards once was known for a fiery political career, but now we remember him for divorcing his cancer stricken wife, and a not-too-secret affair. His selfish lifestyle isn’t just hurting his reputation, it’s hurting his kids! Edwards is raising his 12-year-old son Jack Edwards and 14-year-old daughter Emma Claire Edwards in North Carolina, but they’re out of control!

A family source reported the unhealthy living conditions to National Enquirer, print edition January 21, 2013. “John has lost total control of Emma Claire,” the insider revealed. “She’s just not listening to him. It’s shocking how much Emma has changed since her mom died, and John’s lack of supervision is definitely a big factor. It’s even more outrageous that he isn’t monitoring her internet activity.” I’d like to take a moment to remind you that this girl is only 14, and is in formative years, which require a lot of parental attention and supervision! She’s already lost her mother. The time for a solid family is now!

Emma has been abusing social media, tweeting naked pictures from R-rated movies, her dream of having a drug fueled Project X party at her house, and self portraits with the caption, “I f*cking love cocaine!” It’s worse because her wild behavior is rubbing off on brother Jack, who is often involved in her picture scandals. So where is dad in all of this? Edwards just moved his mistress and lovechild close to their home, so he can have a relationship with their daughter. As if the tragedy of losing a mother isn’t enough, Emma and Jack are now dealing with the reality of having a step sister, whose existence started with the betrayal of their family.

Edwards is turning the other cheek to his daughter’s behavior. “There’s no one to blame except her father. Other relatives . . . have tried to steer her down the right path, but it really comes down to John.” This isn’t a normal story about a wild child, because this girl is a minor! When adult kids go wild, you throw up your hands and wish them luck. But Emma is living in her dad’s home, so how does he miss this? The only conclusion I can think of is that he is truly neglectful, putting both his children at risk for more dangerous behavior. Should Edwards regain control and keep Emma healthy and off the internet?