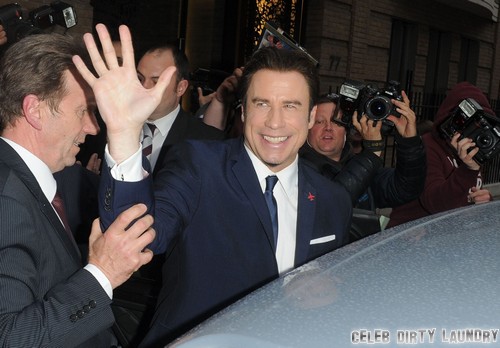 While much of Hollywood was on hand in NYC to pay its respects to James Gandolfini, the actors’ close pal, John Travolta was spotted in London with David Beckham. You’d think that he would have jumped through hoops to fly back to the states to be on hand to say farewell to his friend of many years but there was no way that John was going to do that.

According to the July 15th print edition of National Enquirer, John is still traumatized by the death of his 16 year old son Jett more than 4 years ago. The family had been vacationing in Bermuda when Jett died from a seizure in January of 2009 and to this day, John has refused to attend another funeral. Sources say that he can’t bear the thought of even looking at another casket because it will bring back all of the pain from burying his son.

On June 25th John did pay tribute to James at a British Film Institute event. He also insists that the Travolta family will make sure that the Gandolfini family is taken care of in whatever ways they need assistance. John and James were from the same part of New Jersey and they starred in several films together so there was a real connection between the two.

As for John’s aversion to funeral’s, do you think he and wife, Kelly Preston ever really dealt with the loss of Jett? They seemed to go into hiding for awhile and then opted to have another baby pretty quickly. Was baby Benjamin a way of putting a happy band aid on a painful trauma that was never really dealt with? Does John maybe still need a bit of therapy – maybe a lot? Tell us your thoughts in the comments below!