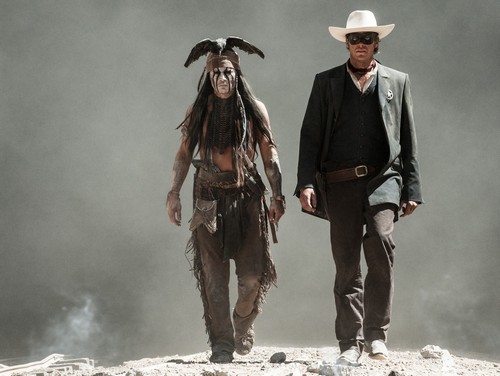 You know the term ‘movie star hubris’? Well, Johnny Depp has become the perfect example of that. He’s starting to think he’s above reproach, even though he assuredly is not.

Obviously, we all know the Lone Ranger bombed, right? Well, it was a passion project of Johnny’s, something he shepherded into production and kept in production, despite ballooning costs and production delays. Disney had high expectations for the film, so understandably they were extremely disappointed with the box office performance.

Of course, the common thing to do when this happens is to accept responsibility – in this case, because of a poor film, confused marketing, and a ridiculous budget that wasn’t necessary – and move on. But no, Johnny Depp refuses.

He’s now blaming the American critics for causing the Lone Ranger to fail, as though people actually read reviews for these kinds of blockbusters. He said, “I think the reviews were probably written when they heard that Gore and Jerry and I were going to do ‘The Lone Ranger. I think that Gore made a very brave film.”

No, there was an inkling of a ‘brave film’ in the Lone Ranger, but it was mostly just shit. Too long, too boring, and too stupid. And also, reviews don’t make a damn difference to American audiences. They went to see Grown Ups 2, which is at an atrocious 7%. Has that stopped the film from crossing $100 million at the domestic box office? Nope, people still went to see it. Also, films like Transformers remain critic proof and continue to rake in the dough, despite the inherent stupidity and bad reviews.

So no Johnny, American critics didn’t have a vendetta against your film and they didn’t cause it to tank. You can put the failure of this film and the bad reviews to the simple fact that it sucked, and it looked unwatchable even to people who didn’t know it sucked.