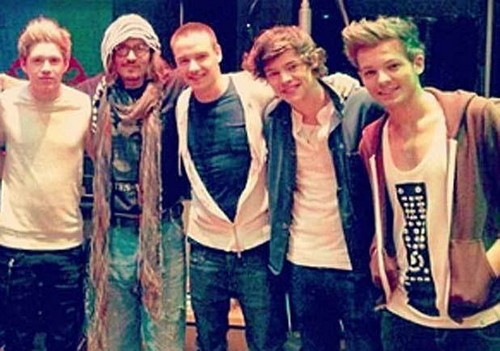 HAHAHAHAHAHA. I’m sorry, HAHAHAHAHAHAHAH. I can’t stop laughing at this story. According to several new reports, Johnny Depp is thinking of joining One Direction.

The rumors started when Johnny was spotted heading to a recording studio with Zayn Malik, a 1D member. Ed Sheeran and Alexander DeLeon were also spotted in the same studio, and Alexander later uploaded an image of himself with Zayn and Johnny with the caption, “Pirate lessons from the one and only. thanks for having us, mr. depp.”

Johnny has previously spent time with One Direction, stating this daughter, Lily Rose Depp, was a huge fan. This could have been a similar situation where he agreed to help them out with something or simply jammed with them as a favor to his daughter. Or he could genuinely enjoy spending time with them, and had some free time off.

Or – as much as I hate to think this – Johnny’s just getting immature in his old age and hanging out youngsters has become his new thing. After all, his new girlfriend is more than 20 years younger than him, and now the bands he’s hanging out with are even younger than that.

I don’t want to be too harsh in this particular instance because I like One Direction, and Johnny does have a previous connection with them. Since we don’t know exactly what he was doing, I’m just going to pretend he was helping them out with something. I don’t want to think Johnny is hanging out with a bunch of teenagers simply because he has nothing better to do.

What do you guys think of Johnny Depp hanging out with One Direction, and do you find the rumor that he’s joining the band as ridiculous as I do? Let us know your thoughts in the comments.