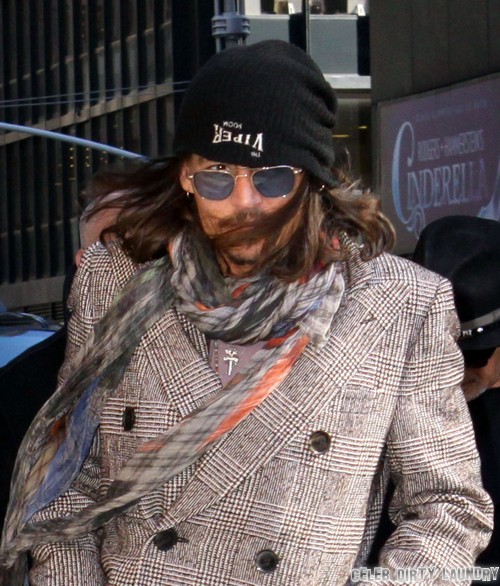 Whenever we see Johnny Depp with Amber Heard, we can’t help but wonder what happened to the beloved Johnny Depp of the last decade. You know, the one who was cool and who didn’t wear twenty scarves and belts.

Now, all we see is the guy who tries too hard. He’s Johnny Depp! He shouldn’t be trying at all! That was the whole mystique. And thanks in part to Amber Heard, that mystique is gone.

Look, they’re adults and it’s their choice who they want to date. They hit it off while filming The Rum Diary, so good for them. But apart from the fact that he’s Johnny Depp, why is Amber Heard with him? What on earth could they possibly have in common?

How do you go from Vanessa Paradis to Amber Heard? Again, not knocking on Amber Heard, but it’s all difference in opinion, isn’t it? Amber’s certainly very attractive, and maybe that’s all Johnny wants right now. But what about Amber? What is she getting out of this relationship?

Obviously a lot of free publicity, and then some. There was a story in a tabloid last month about how Amber ended up getting a bigger trailer than Gary Oldman on her last movie because she was dating Johnny Depp. See? Dating Johnny Depp has many, many perks. It also doesn’t hurt that after she filmed the Rum Diary, she’s been busy filming back to back movies with prestigious actors. Some help from Johnny there, perhaps?

Another perk is that she gets to travel with him whenever he’s promoting his films. If you look at the photos of the kids, Johnny, and Amber in Tokyo from a couple of days ago, the looks on their kids’ faces are cracking me up. Amber seems like she’s trying to hold on to Johnny’s son, and he’s actually pulling away in one picture. Obviously! They want to hang out with their dad in the little amount of time they actually get to spend with him. They don’t want to share that with some woman they’ve barely known for two years.