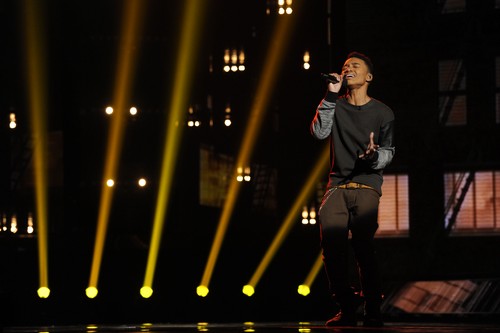 Josh Levi took the stage  on THE X FACTOR USA for  his Top 10 live performance and British Invasion Night.  Josh Levi sang “Sweet Dreams (Are Made Of This)” by the Eurythmics. On tonight’s show the top 10 performed live in front of coaches Simon Cowell, Kelly Rowland, Demi Lovato and Paulina Rubio for America’s vote and to make it to the coveted “Top 8.”  Did you watch tonight’s performance show? We did and we recapped it here for you.

Judges’ comments: Kelly said, “I don’t know where to begin, within this moment I am a little bit jealous of Paulina.  I would love to work with you.  You are so incredibly talented.”  Demi said, “I am so excited because I think you have so much ahead of you.  You remind me of Chris Brown.  You did really good.”  Simon said, “You are one of the artists I look forward to every week.  But your mentor is actually mad – that whole sequence was insane.  She must have been drunk when she came up with the concept.  It was bonkers.  I would like to see you on your own.”  Paulina said, “We have the power in this competition and I don’t care what Simon said.”

If you want to see Josh make it another week, you have to vote for them.  Josh took to his twitter today and talked about how he excited he was about One Direction performing he also said he hopes to be as big as them someday.