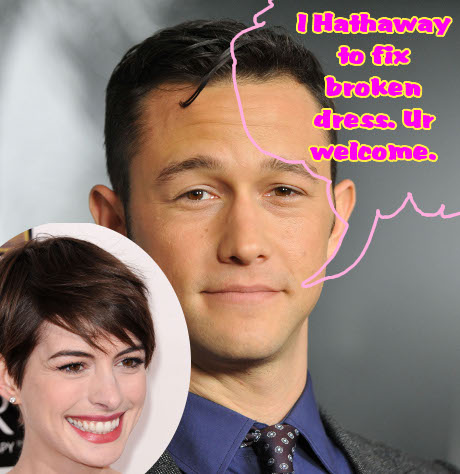 Just when I thought that I couldn’t possibly like Joseph Gordon-Levitt anymore, he proves me wrong. Instead of walking away from an issue, he decides to do something about. The issue at hand, another Anne Hathaway wardrobe malfunction. Anne Hathaway’s broken dress strap needed a little fixing up — to prevent another nasty, disastrous wardrobe malfunction of course. The world knows she doesn’t need another one of those!

Last night was the annual Critics’ Choice Movie Awards ceremony in Los Angeles with both stars on the carpet to accept trophies for movies they were in, Les Miserable and Looper. However, it seemed that Hathaway was about to have another wardrobe malfunction as her strap on her Oscar de la Renta gown couldn’t make it the whole night. Being the gentleman he is, and also serving as a little product placement for his own good, pinned his red HitRecord pin onto the strap to have it stay in place. Such a lifesaver that guy!

Of course after the incident occurred, JGL had to capture it with a photo and put it onto his Facebook and Twitter account with the caption: “Photo: Annie tore the strap on her dress, but luckily I had a pin :o)” For those of you that don’t know, the little pin comes with every order you place on Hitrecord.org, which just happens to be JGL’s direct collaborative website for all types of people, writers, animators, singers, songwriters, etc. And you know what they say, any publicity is good publicity. Also, it’s good to see that the rumors a while back aren’t necessarily true. Apparently Joseph Gordon-Levitt and Anne Hathaway are friends and don’t completely hate each other! That’s always good. They seem like a couple of cute friends.

What do you think about Joseph Gordon-Levitt’s moment of heroism? Do you think he deserves a best friend gold star away? Good thing he was by her side or our dear pal Anne just might’ve had another wardrobe malfunction. The tabloids would’ve love that!