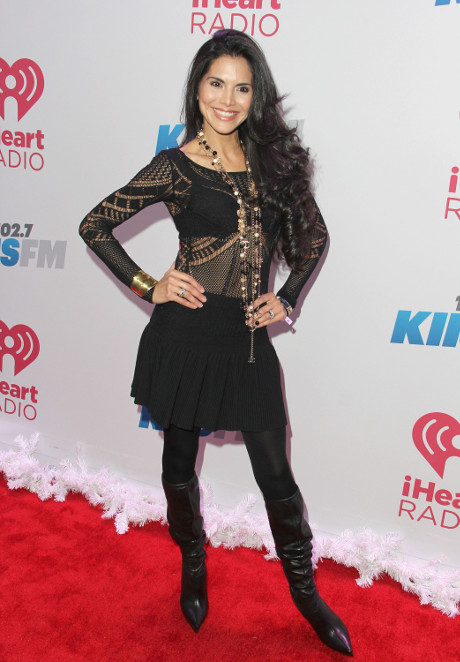 Move over LeAnn Rimes, there’s a new “star” that detests Brandi Glanville and she’s taken to Twitter to engage in “Twitter wars” for attention. It’s none other than Joyce Giraud.

Joyce, along with Scheana Marie — who is a star on Vanderpump Rules and who also slept with Eddie Cibrian while he was married to Brandi Glanville — were guests on Watch What Happens Live. It is obvious that these two were paired together in a not-so-subtle attempt to capitalize on whatever drama they can squeeze out of Brandi.

After the show, Joyce took to Twitter in attempts to continue conversing with Brandi — to milk the drama for all it’s worth. Two people, one who was siding with Joyce and the other with Brandi, were talking about how Brandi was the victim in her divorce, when Joyce suggested that the reason Brandi should just shut up and go away is because she isn’t the first person to have ever been cheated on: 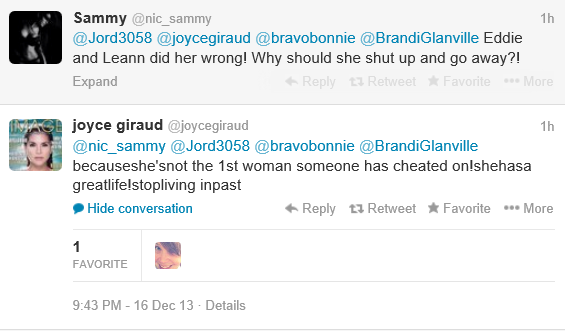 And Joyce didn’t stop there. In fact, she seems to be taking plays out of the LeAnn Rimes Twitter Playbook because when she wasn’t clogging up her timeline with retweets of compliments she was getting, or tweeting how happy she was, she was talking about Brandi. Here are a few of her Twitter quotes, all from last night and all of which she tagged Brandi in. Real classy Joyce.

“…She WAS the victim.so many years later. She plays the victim.”
“ she needs to start living her blessed life and enjoy the blessing instead of dwelling.”
“Brandi! Plz convince them to show all of it since u say they didn’t see it all. they will see u lie!”
“I wish her happiness but 2 b happy she needs to let go of the past xo”

She even had the audacity to say it’s Brandi that keeps bringing up Eddie and LeAnn’s affair, writing, “She’s the one that brings it back all the time.”

Joyce has actually been taking plays out of LeAnn’s Twitter playbook for a while now. She’s not afraid to confront those who don’t agree with her and truly believes her opinions are more valuable than anyone else’s. Joyce actually direct messaged a few people on Twitter this week in what seemed like a high school attempt to win favor over Brandi, telling one person in a direct message, “I’m sure there is a lovely person inside there wanting to come out.”

Although Joyce definitely seems to be the new LeAnn of Twitter, just don’t say she knows, has met, or is friends with LeAnn because she has made it clear that she is not – I repeat not – affiliated in anyway with Ms. Rimes.

Others have insinuated that Joyce and LeAnn have possibly met through their husbands or at a previous benefit but not Brandi, so this tweet seems to have been for attention purposes only and, like I said, it wasn’t the first time. Back in November, Joyce tweeted that she’d never met LeAnn, and LeAnn responded then as well: 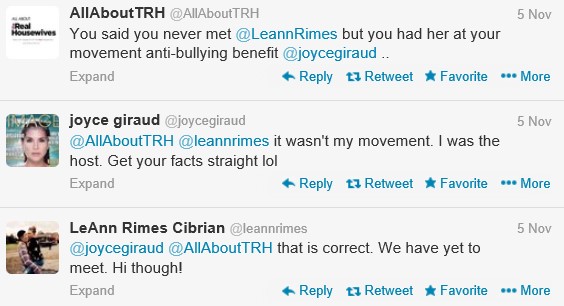 On a related note, LeAnn’s enthusiastic HI was met with crickets because Joyce didn’t respond to her. There was also this time: 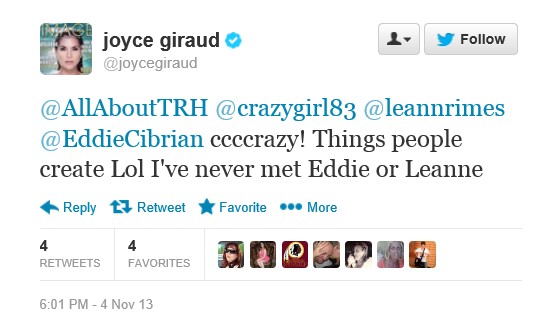 Let’s just say it seems very important to Joyce that we know that she does not know, nor has she ever met, LeAnn. In all of this RHOBH drama, it is obvious that LeAnn — who is currently on the outside of the country music industry — is making every effort to attach herself to Brandi’s drama, which is pretty pathetic. She did it with the Joanna Krupa Fiasco.

When asked about Brandi being on the Real Housewives of Beverly Hills, LeAnn once said on the Tonight Show with David Letterman, “[I’m] flattered that I can be such an amazing story line on a reality show.” Now it seems that it is Brandi that should be flattered by the fact that both LeAnn and Joyce are trying to hitch a ride on her coattails as they grasp for relevancy. My how the tables have turned.