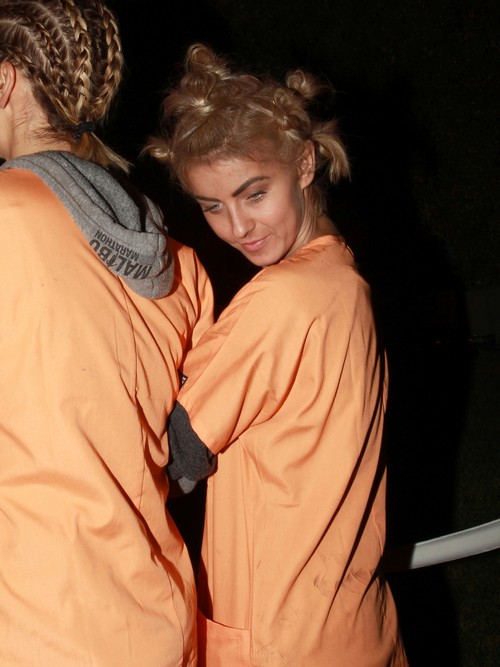 In this day and age, how stupid do you have to be if you willingly don blackface and step out in public? Especially when you’re a celebrity?!

Julianne Hough has proved that she’s either one of the world’s dumbest celebrities around or she’s just a massive famewhore by stepping out for Halloween as Crazy Eyes from Netflix hit Orange Is the New Black. Only problem? In addition to the prison outfit and the crazy hair, she decided to paint her face black because the character is African American.

I mean, why would you EVER think that something that offensive would be considered acceptable, especially when there are so many controversies revolving around racism and discrimination? I mean, she could have gone with just the outfit and the hair, and people STILL would have recognized her – it’s not like there are many famous characters in hit shows that wear prison jumpsuits and have a crazy hairstyle.

Of course, Julianne clearly doesn’t have anybody close to her who was willing to tell her how stupid she looked, exemplified by her brother Derek Hough uploading on Twitter, “Orange is the new Black !! Genius costumes. Love how much they commit and have fun with a show they love. #womanunit.”

Obviously, Julianne’s blackface caused a lot of controversy online. Instead of leaving it alone and letting the controversy die down in its own time, Julianne then issued an official statement apologizing for her outfit, saying, “It certainly was never my intention to be disrespectful or demeaning to anyone in any way. I realize my costume hurt and offended people and I truly apologize.”

What an idiotic move. She never should have worn the damn outfit in the first place, but after she did, she should have gone away and let the public forget about it. By apologizing [which I doubt is actually sincere to begin with], she’s ensured that everyone will be talking about this for weeks to come.