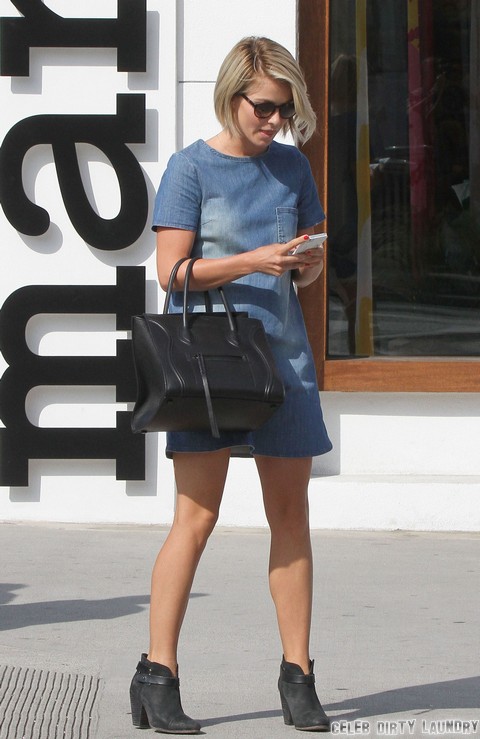 Breakups can be rough to go through and in the last few months we’ve watched longtime couple, Julianne Hough and Ryan Seacrest seem to move on pretty easily. He wasted no time after their split before reconnecting with an old girlfriend- something that I’m sure pissed Jules off! She has responded by being a carefree, single 24-year old woman and mingling with lots of guys.

Let’s face it, our first impressions of her being an angel back in her Dancing With the Stars days were a bit off. Jules is a party girl to the millionth power. There isn’t a dance floor that she’ll ignore or a cute guy that she won’t grind on. Supposedly Jules was upset that her relationship with Ryan never progressed and she got tired of waiting for a ring. Then there’s that other story about her cheating with an ex-boyfriend last year and Ryan just never getting past it. I suspect that version might be a little more true and both sides now admit there’s no chance for a do over.

According to the May 27th print edition of National Enquirer, Jules doesn’t miss Ryan, at least not exactly. She does wish she still could call him for fashion advice though! She has resorted to calling friends when getting ready for a big event but she’s the first to admit that absolutely no one gives better fashion advice than Ryan. Jules believes that his taste is impeccable and that as long as he was at her side she would always look amazing. Now, she’s a little worried about hitting those red carpets!

Are you surprised to learn that Ryan functioned as Jules stylist for the last few years? Would you like to see them reunite even though the odds seem against it? Tell us your thoughts in the comments below!