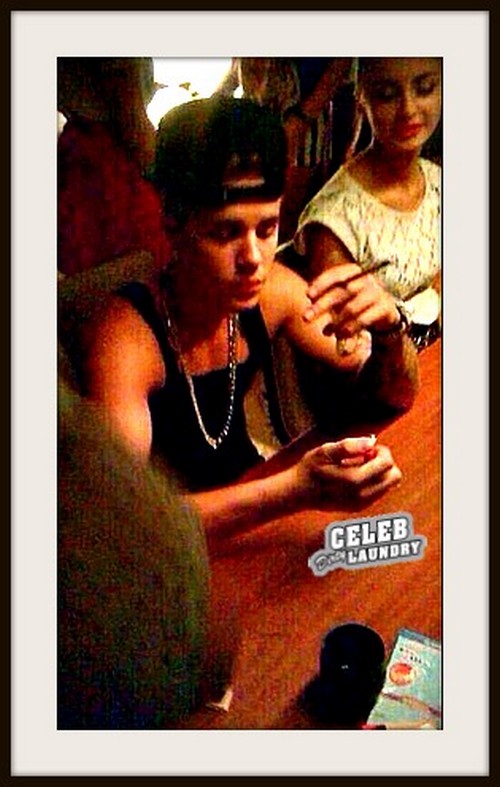 Will Justin Bieber ever, ever learn? Although we know he’s still as narcissistic as ever [after he made his bodyguards carry him up the Great Wall of China], I had assumed that he learned from doing drugs at parties. Firstly, he should be worrying about his career and fans right now, especially after all of his recent shenanigans. Secondly, he’s at a PARTY with PEOPLE, and he doesn’t get that he will be photographed and the picture will go viral if he does drugs in front of everyone? This is the problem – most celebrities think they can act like normal people at parties, without realizing that most people would sell them out without giving it a second thought.

Anyway, after being photographed smoking up in the past, Justin was spotted with what looked like a long joint in his hand at a party. He seems to be sitting next to his rumored hook-up/girlfriend Ariana Grande. However, TMZ’s sources claim that the girl sitting next to Justin is not Ariana, and the picture was supposedly ‘photoshopped’ to look like Justin was smoking up.

Um, what else would he be doing? How would the pic have been photoshopped to make Justin look like he was smoking? Considering these sources are close to Justin and Ariana, obviously they have a vested interest in making sure that people don’t believe this story. Although everyone expects this kind of behavior from Justin, Ariana is still a teen darling with a lot of young fans, and smoking up with Justin would ruin her reputation.

What do you guys think about Justin smoking up again, and this time possibly with Ariana? Let us know your thoughts in the comments.