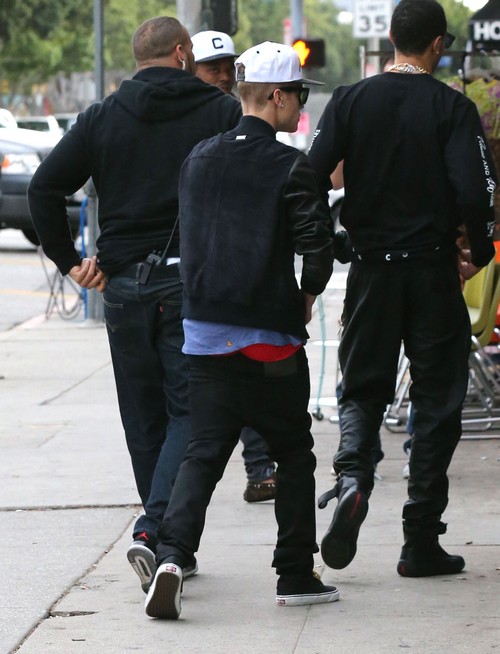 Kauai sounds like an idyllic playground for beach bitches and sand bands singing Beach Boys covers. This beautiful island paradise turned into a battle ground on Wednesday when Justin Bieber’s creepy bodyguard assaulted a 29-year-old man and his camera. It is believed that both the camera and the man were assaulted simultaneously, making this a Kodak moment of epic proportions.

Bieber and his crew were “jumping off the famous cliff on Shipwreck’s Beach” when the photog started clicking away on his camera, trying to capture Bieber in an awkward, testicle-busting position. Dwayne Patterson confronted the dude and demanded he delete all of the photos. Obviously the photographer refused – who wouldn’t? Patterson didn’t like this at all so he tried to be all Kevin-Costner-gone-rogue-in-Whitney Houston’s-superstar-house, and “violently attacked” the man according to TMZ.

The victim informed the police that he had no injuries and refused medical attention. The camera, however, was a crumbled heap of Nikon bones. The cops arrested Patterson and booked him for 3rd degree assault and 4th degree criminal property damage. He was released on $3000 bail.

The Bodyguard: Reality TV Edition wasn’t as exciting as Patterson first thought. You can’t go around punching photographers and eating cameras. Bieber was jumping off cliffs trying to relive his Castrati days, so there’s no reason why an innocent photographer couldn’t take pictures.

Bieber is as controversial as North Korea, except Bieber doesn’t fake mourn a dead dictator. The dark cloud follows him around, picks on him and makes him cry. A diva was born the day Bieber was born. Fame went to his head and made him drunk with power.

And now we have Coldplay, Miley Cyrus, Justin Bieber and Kim Jong-un – in that order.

What do you think? Was the photographer in the wrong? Should Bieber be left alone to roam the earth like a rebel hobbit? What do you think about paparazzi and celebrities in general? Don’t we all enjoy a good photo of a celeb gone bad?

Let us know your thoughts in the comments below