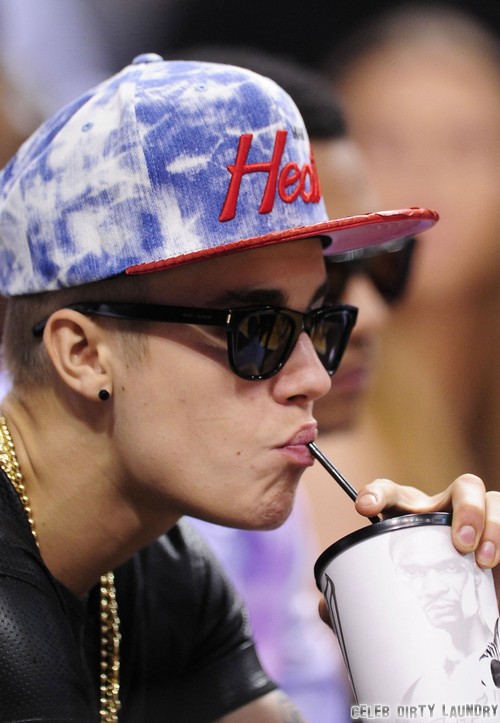 Rules and regulations don’t actually apply to celebrities. The head honchos at Hollywood 101 guarantee that any and all celebs are created with a lifetime warranty of wrist-slapping and fake weeping. Lindsay Lohan, the star of “Hobos Gone Wild: Pansexual Edition”, is a prime example of this unwritten pronunciamento. (The Kardashians, Amanda “Sexface” Bynes, Miley “Smiley” Cyrus, and Rihanna “Bring Your Banana” are also registered as honorary inductees). However, this mob of faux crooks won’t be complete without their star attraction, Justin Bieber.

Yes, you guessed it, Bonnie and Bieber isn’t a nightmare.

According to a new E! News article, Bieber arrived at Lure’s Toxic Luau Beach Day party with egotism and entourage in tow, but shortly after his arrival, the Bieber was bounced. A source reveals, “Someone from Justin’s team had come earlier in the day and told the club that he would be showing up. The club told him they wouldn’t let him in because he’s not 21.” The man-child then attempted to slip in through the back door, but his cover was blown when The Game “gave him a shout out while on stage.”

“The Game was on the mic at this point and saw Bieber trying to get in and shouted that Bieber was on his way inside. That’s when security saw him and escorted him out immediately. He left right away. He seemed really embarrassed,” reveals the source.

And as the setting sun soaked the L.A. skies, Bieber’s gang of criminals revved up their engines and raced away from the scene of the crime. Their leader, the ultimate demigod, was left behind in a bathtub filled with tears and dust and fickle farts.

Do you think the Bieber should’ve been allowed into the club? Or do you think this was a no-no on his part? Let us know your thoughts in the comments below.

ICYDK Elaborates On Bieber Breaking The Law In Even Worse Ways – CLICK HERE!