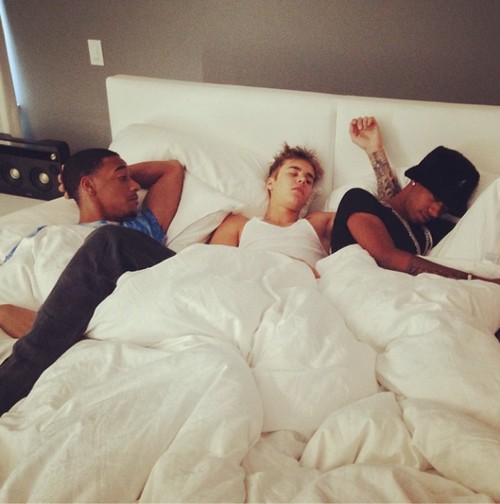 An Instagram pic showing Justin Bieber cuddling in bed with Lil Za and Lil Twist has gone viral. Why exactly is Justin cuddling in bed with his rapper best friends and bona fide bad influences? Well, it seems the trio has reunited after some rumors last month about Justin cutting them out of his life. So much for Justin learning from his mistakes and getting rid of the negative influences in his life.

He may have tried to do it for a few months, but then realized that he hated being responsible and trying to be mature. So then he gave up his buddies a ring, they went on a bender, and then passed out together.

Then again, it’s not clear when this picture was taken. Lil Za and Lil Twist could have had it released to drum themselves up some publicity, if Justin has indeed dumped them. Since they can no longer ride his coattails, they’re doing the best they can to keep themselves relevant in a decreasing-attention span society.

Will it work? Well, everybody’s talking about them and their supposed reunion with bestie Justin Bieber, so I guess it did, right? If it’s not true, I’m sure Justin will send over his bodyguards to set them straight, considering he would never start a fight himself for fear of getting pummeled to death. If it’s not true, then Justin is continuing to make idiotic life decisions that will surprise approximately no one.

What do you guys think of the Instagram pic? Do you think it’s an old picture that’s only getting released now, or it’s new and Justin is once again friends with both Lil Za and Lil Twist? Let us know your thoughts in the comments.