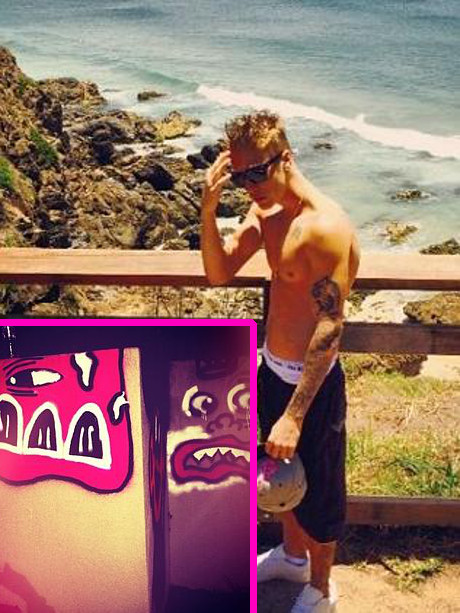 Justin Bieber‘s creative side has been showing through a lot lately. Recently, Justin was caught doing graffiti on a wall in Rio and now The Beebz was spotted tagging a wall on the Gold Coast. And guess what? The mayor of Gold Coast isn’t exactly thrilled with Justin’s form of artistic expression, saying he and his entourage did something “really, really silly” when they thought it a good idea to paint monsters (and a plethora of other ridiculous creatures) on a hotel wall.

Justin seems to find his muses at walls located near or beside hotels and then proceeds to mark them up — his latest form of rebellion. Justin and his team carried out the artwork in the early morning hours, not long after a performance, and didn’t even bother picking up their countless spray cans. No charges have been placed, and some sources are even saying he had some form of “permission” to carry out the act; however, with the mayor’s insistence on it being cleaned/covered up soon, it seems quite unlikely that he was granted any type of allowances to color up the street.

Justin posted proof of his artwork on his Instagram, which can be seen up above. The pics feature Justin posing shirtless on the Gold Coast and include a snapshot of his artistic talents. His artwork actually does have a particular charm to it, but it’s not cool to vandalize property, even if you are the most famous pop star in the world.

What do you all think? Do you believe Justin should be allowed to spray paint whatever the heck he likes? Leave your thoughts in the comment section below. We’d love to hear from you!