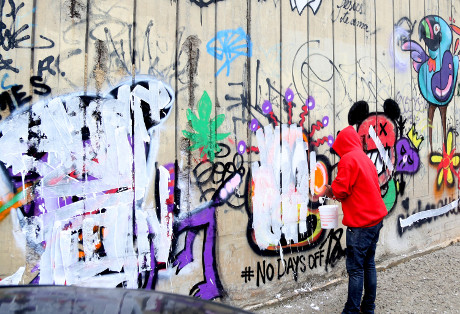 Justin Bieber continues to be a crazy, wild animal while in Rio de Janeiro. Just last night he was supposedly caught by paparazzi making graffiti “art” on the walls outside of his hotel room. According to sources, Justin ventured out to spray paint walls near the Hotel Nacional at 3 in the morning when the paps caught him vandalizing the property. Apparently, Bieber was so mad at the photogs that he cursed them out, totally lost his cool, and ordered his bodyguards to attack the paparazzi. Wow, he’s losing it!

One of the photogs reportedly had his shirt ripped to shreds and another supposedly had a paving stone thrown at his car. This news comes just after Bieber was caught having happy-good-times with a bunch of prostitutes.

We can’t believe how crazy and reckless The Beebz has gotten over the course of these past months. If he doesn’t shape up his attitude soon he’s going to be in for a rude awakening. Just because he’s the biggest lil’ popstar boy on the planet doesn’t mean he can treat everything and everyone like his property. Get it together, Beebz!

Has Bieber finally entered that downward spiral of crazy that so many young stars find themselves in when their name and ego grows too big? Leave us your thoughts in the comments section below! And don’t forget to check out the pics of Bieber’s “amazing” artwork, which the photogs took the liberty to clean up for him.