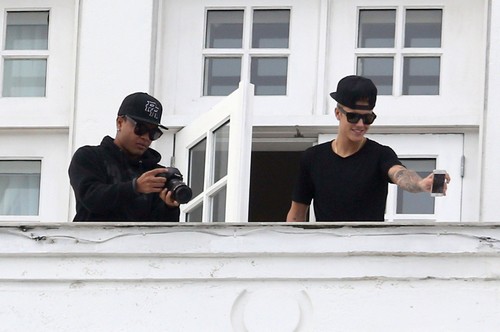 Justin Bieber has no shortage of girls throwing themselves at him – for free – but that didn’t stop him from visiting a whorehouse in Brazil November 1. Justin, who is touring in Brazil, was caught my photographers sneaking out of the popular brothel Centauros in Rio de Janeiro with two prostitutes in tow.

A source told Page Six (see pics) that Justin attempted to sneak out of the brothel into a waiting SUV by covering himself with a bedsheet, but he failed to properly conceal his arm and was identified by the tattoo on his wrist. He was also wearing his signature sneakers, and apparently his security team confirmed it was him. So it is safe to say it was indeed the Biebs under those sheets.

An insider told MailOnline that Justin had no idea he was visiting a whorehouse and simply thought he was going to a private members’ club, saying “Justin had been forced out of his hotel by the huge amount of fans that had gathered outside making it impossible for him to go in and out as he pleased so he planned to go to a private members club.” Likely story.

According to Brazilian news web site EGO, following his visit to the Brazilian brothel, Justin was kicked out of the upscale Copacabana Palace hotel in southern Rio he was staying at because, “he had been partying, doing drugs, and disturbing people.” Another source insisted that Justin wasn’t kicked out of the hotel, but left on his own accord because of, “security issues.” The singer and his entourage are now staying at a rented mansion in a gated community.

Justin’s visit to a brothel comes on the heels of reports that he spent the night with a hooker while in Panama last week. A prostitute told the Panamanian newspaper Cronicas that after meeting Justin at a nightclub in Panama, Justin paid her $500 to have sex with him. She told the paper that, “He took her back to his hotel room and the two smoked weed. After the sex, he returned her to the club, where she met back up with friends, she said.”

Also it was just a few weeks ago that Justin was photographed at VLive a strip club in Houston, Texas with his shirt off grabbing a dancer’s ass. Said dancer tweeted about the experience the next day confirming that the Biebs did indeed get touchy with her.
It is becoming clear that Justin has a penchant for clubs of a certain nature, and at this point it is safe to say that somewhere Selena Gomez is thanking her lucky stars that the Biebs is no longer a part of her life – that is until she needs a boost for her next music release.

Justin Bieber hangs out on the balcony of his hotel, the one he got thrown out of, in Rio de Janeiro, Brazil and snaps a few pictures with his friends.