BY Siyana Riley on May 9, 2013 | Comments: one comment
Related : Justin Bieber, Selena Gomez 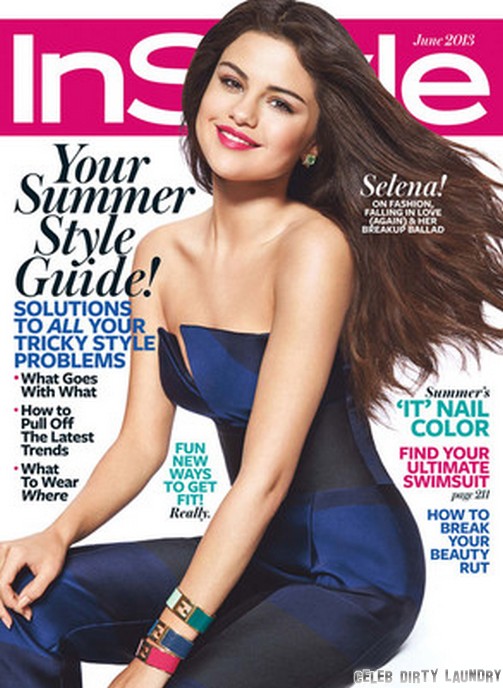 You know, it’s funny that Selena Gomez and Justin Bieber have had such a tumultuous on again/off again relationship, but only Selena has been speaking to the public about it. We all know Justin Bieber isn’t exactly the ‘private’ type, but he seems to prefer letting his Twitter and Instagram do all the talking. Meanwhile, Selena has not been shutting up about the Biebez on talks shows and interviews.

Selena covers the latest issue of Instyle Magazine, and she’s pretty candid [Read: promoting her new album] about her relationship with Justin. Conveniently, she manages to promote her new album while talking about Justin at the same time. She discusses her album’s track ‘Love Will Remember’ in context of her relationship with Justin, explaining, “That’s the most personal track on the record, for sure. I think it’s a sweet way of releasing it. It’s not an aggressive approach to what people are probably expecting.” She adds that she thinks that JB will ‘love [the song] too.’

She also adds that the spotlight on their relationship has been incredibly ‘crazy and intense’, adding, “It’s uncomfortable that everywhere I go, people know. I don’t like that. But Justin and I never really focused on the attention. You can’t help who you date. So I wouldn’t swear off that or say that’s what I want again. I don’t know. I’m a kid, and a breakup is normal. I have to go through the emotions and feel it out. I’m doing my own thing, being with my friends, and he’s doing very well too.”

Well played, Selena Gomez. Well played. Tie in Justin Bieber and her new album, and what do you get? Enough exposure to make that album go platinum in a week.

Editor’s Note: WTF did they do to Selena’s face – photoshop is one thing but this is NOT Selena is it?  Has she always had that lazy right eye?