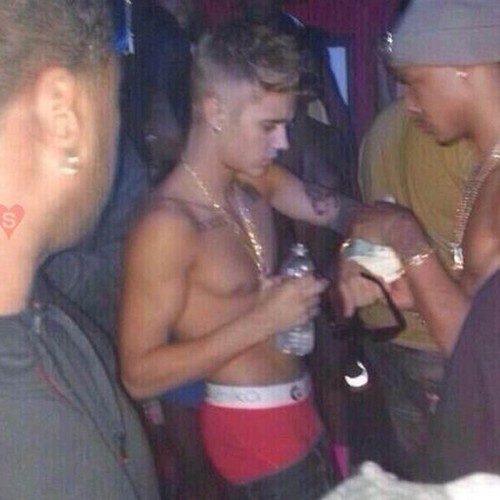 Do you remember when Justin Bieber was that cute boy whose cheeks you wanted to pinch? When Canada was proud he was a Canadian? Well that’s all over and the cute kid is gone, what is replaced is a spoiled, arrogant, surly out of control 19-year old.

Last night Justin went to a Texas strip club and he had his shirt off and his pants down really low. I mean, they were so low there was no need to have his pants on and not much left to the imagination. Whats special about this strip club? Well lets just say they girls get up close and personal and are not afraid to touch and…. Maybe Justin thought they would get him on stage to perform. My question is, I thought you had to be 21-years-old to go to a strip club in the USA if alcohol was served? I guess we are expected to believe there was no booze on the premises.

Justin had a great time at the strip club, he came in dressed and as the evening progressed he was in a state of partial undress. Not only did Justin have fun but one of the strippers who he was partying with did too. The stripper tweeted to her twitter account, “I’ve Danced For A lot Of Celebrities And They Normally Don’t Phase Me But Justin just Had Me In Shock !

Wonder what shocker her, was it is toned physique, new blue eyes, haircut or could it have been his money? Hmmm not hard to guess that one, right?? Justin Bieber made it rain for her, you guess?  She also uploaded the photo below of a lot of money on the ground – now not sure if that was from Bieber but she seems to imply it was.  Anyway the women went on to tweet, “He Was Like Its Real !!- – He Touched My Ass I Almost Fainted”

In the words of EDM producer Deadmau5,“Dear @justinbieber , would you please grow the fuck up already? In the meantime, put a shirt on, and stay away from nightclubs.” Actually I would add in pull your pants up, no one wants to see your underwear.

I am not sure if Justin is trying to look like a douche, but he could easily win douche of the year at this point.  Does anyone see a resemblance starting to form between Scott Disick and Justin Bieber?