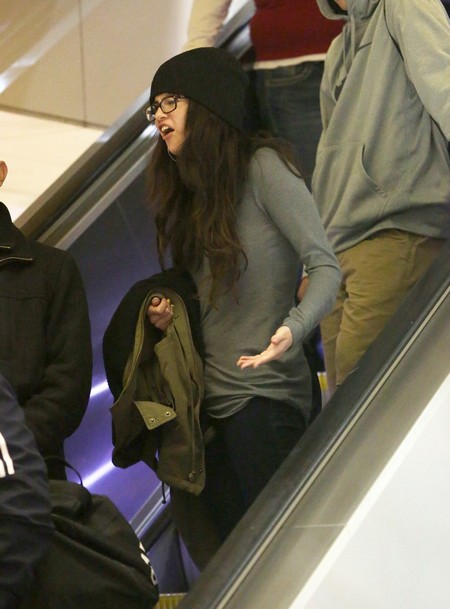 A few short weeks before a double break up that shook the entertainment world, Taylor Swift, Harry Styles, Selena Gomez, and Justin Bieber enjoyed a double date ski holiday in Utah. But what should have been a fun winter wonderland getaway turned into a girls vs boys nightmare, when Justin refused to help novice Selena on the slopes, leaving her to the teaching of bestie Taylor Swift!

National Enquirer, print edition January 21, 2013, reported, “While the guys went off snowboarding, Taylor coached novice skier Selena. But on the chairlift up the mountain, Selena got her skis entangled with Taylor’s, squirmed to get free, and plunged them face first into the snow!” The boys were oblivious to their troubles, but later met up on a beginner’s run, where Selena continued to fall over, unable to keep her balance! The guys went on ahead, leaving Taylor to help Selena, before “the gals finally reached the bottom and cut up with their guys.”

It may not seem like huge news—their boyfriends ditched them while skiing—but it it speaks volumes about their relationships! Harry and Justin shouldn’t have broken off from the girls, and should have been gentlemanly about helping novice Selena! What’s more, they knew she was struggling and left her to go on ahead! Selena finally made it, thanks only to Taylor! If the girls were putting up with this sort of behavior often, I don’t wonder why they’re single now!

Taylor and Selena are leaning on each other, and gossip is stirring that they may end up on tour together! Meanwhile, their loser ex boyfriends are planning a boys party trip to Las Vegas this spring, where they’re sure to let loose and party with lots of girls—just like they did when they were dating! So nothing much has changed for them! But the PR of being bad boyfriends will do little to help their fan base—bad boys are so out! Do you think Justin and Harry’s selfish behavior hurt their relationships?